Never a dull moment around here.

Studies show that parents of more than 4 children are happier than parents with fewer kids. Researchers speculate it’s because parents of large broods get accustomed to a level of chaos that would cripple other people.

So yesterday I spent most of the day at Children’s Hospital. 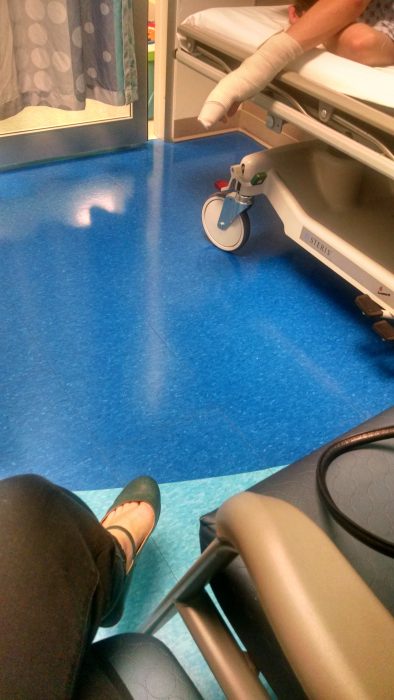 Last weekend my oldest son, who has never broken a bone or had an ER visit, shattered his finger in 3 places catching a football.

The surgery went perfectly, and the surgeon put the pieces of his pinky back together without even making an incision.

This is important for a guitar player, because it will mean less scar tissue and stiffness. 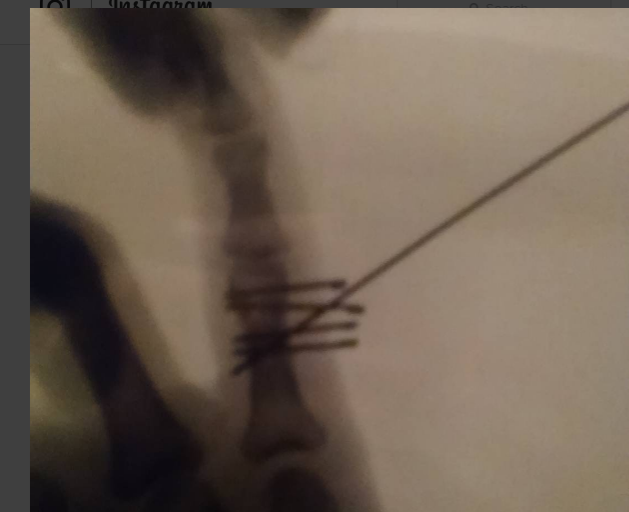 The most stressful part about the experience was sitting and listening to a toddler in the neighboring recovery room scream for a half hour after waking from anesthesia.

My nerves were thoroughly shot after that and I was ready to nestle down in bed with a bottle of three buck chuck and a large bar of dark chocolate.

My son is fine, although it will suck that for the next 4 weeks or so, his guitar playing will be seriously handicapped.

While we were in the hospital, there was a tornado warning. (Not a watch, a warning. The thing ripped a roof off a gas station near my home.)

We had to be relocated from the room we were in to another one … that had no windows. Lights flickered, the cable went out (thankfully, it came back on soon enough for us to find out if Mariska Hargitay nailed the perp in Law & Order, or I would have been really ticked).

Thankfully, I have some practice doing hospitals and know how to survive the experience.

And before THAT, we spotted a coyote, limping around with a broken leg, in our backyard. 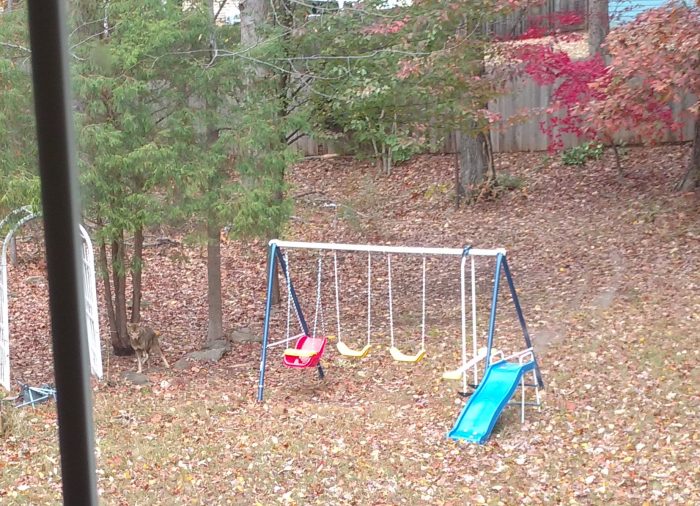 See him there, to the left of the swing set?

I called 911, who told me to call the Department of Natural Resources, claiming that Animal Control wouldn’t respond to a call about a coyote, who then had me call yet another government office after asking if it was a “large mammal or a small mammal”.

(Huh? It’s a coyote. Don’t you know how large a coyote is, responsible-government-person-in-charge? It’s larger than a bread basket, but smaller than an elephant.)

Did I mention the coyote had a broken leg? So it was in pain, and hobbling around my swing set in broad daylight, which is unnatural behavior for these animals.

They suggested that if I had a crossbow, I could go ahead and put the animal out of its misery.

Darn, I just loaned my crossbow to a neighbor.

Broken bones, tornadoes, coyotes… another day in the life.