When I took my newborn to the hospital, I had no idea she would have to be admitted for testing and treatment (IV antibiotics). The only thing I brought with me was myself, my sling and a toothbrush (expecting a long ER wait). 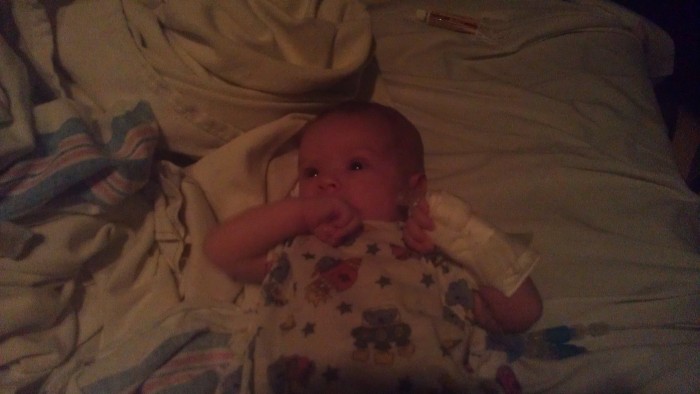 If I have to do a hospital again, I’ll be more prepared. I present my list of tips and tricks here:

How To Survive The Hospital

After being admitted to the hospital, I sent my husband home to take care of our 2 year old and look over the other kids (who thankfully, were staying with relatives). I also emailed him the following list of things to bring me the next day:

Thanks hon. I love you!

Here’s where I explain why I asked for those particular items. 🙂

Hospitals are cold. I was freezing until the last 24 hours I was there, when we were moved into a bigger room with its own thermostat. And I’m not a cold natured person at all, especially not postpartum and breastfeeding! That explains the extra socks and clothing.

Hospitals are boring. Hence the request for reading material.

Hospital food sucks. Actually, it didn’t taste horrible, it’s just that the dieticians are all falling for the pseudoscience that says that salt and fat are evil. The portions were too tiny for a lactating woman, and everything was dry and nothing had any fat in it. I asked for butter and they offered Promise spread. Umm.. NO.

As a lactating mom, I got extra food, which I thought was good of them… but a nursing mom (and indeed everyone) needs plenty of fat in her diet. Hubby brought me coconut oil, which I ate by the spoonful, and a stick of butter which was liberally spread.

If your baby is accustomed to cosleeping, then go ahead and continue that practice. It may take some ingenuity to figure out how to do so safely. In the first room we were in, there was a chair that made into a cot (horribly uncomfortable), and a humongous crib that would have easily accommodated Jabba the Hutt. I actually curled up with my baby inside that thing and raised the side rails. I did the same thing when my second child was in hospital getting surgery. Noone said a word about it.

When we moved to the larger room the third day in hospital, there was no huge crib, only a tiny bassinette and regular hospital bed, which had no side rail or other way of making it safe to share with a baby. I knew Victoria wouldn’t take kindly to the bassinette, so I had to figure out other options. I actually considered putting all the bedding on the floor and camping out there. But it just so happened that there was a small sofa, long enough for my body, in the room – it folded out into a sleeper. It was right up against the wall with no spaces inbetween, and had no crevices in it that she could roll into. So we slept there! When I nursed her in the night, I had to actually flip, head to foot, to the other side of the bed instead of rolling over, so that she stayed inbetween me and the wall.

None of the nurses had any problem with this arrangement. In fact when they came in to check on her in the night, they did so quietly and gently enough that (if she was nursing) she was undisturbed.

My sling is always an extremely useful tool, but even more so when I was exhausted from lack of sleep and the stress of the experience. No doubt the baby was also comforted by the womb-like feeling of being snuggled in the sling. It was a little tricky figuring out how to get her in it without disturbing the IV in her arm, but once I got her settled in, it was lovely.

Make Friends With The Nurses

The nurses were all great, and it’s clear that they pretty much run the show. If you make friends with them, they’ll advocate for you with the doctors. I made a point to be friendly and accommodating and it paid off.

Hospitals are notorious for being places where it’s impossible to sleep. The nurses and Doctors were waking me about every half hour all night long the 3 nights I was there. Add to the sleep deprivation the stress and worry I felt about the baby, and you have a recipe for anxiety and depressive feelings. I listened to Bible readings and spiritual songs on my phone to keep my mood up, and did a lot of praying.

Have you ever spent time in the hospital with your child? What helped you make the most of the experience?