For several years now, I’ve been taking a summer break from homeschooling.

So, you’d think I would learn.

The first couple of weeks, I let the kids enjoy some lazy downtime. They sleep late. They lay around on the couch reading, building with LEGO, watching movies.

We go to the pool. They Kik and WhatsApp their friends. 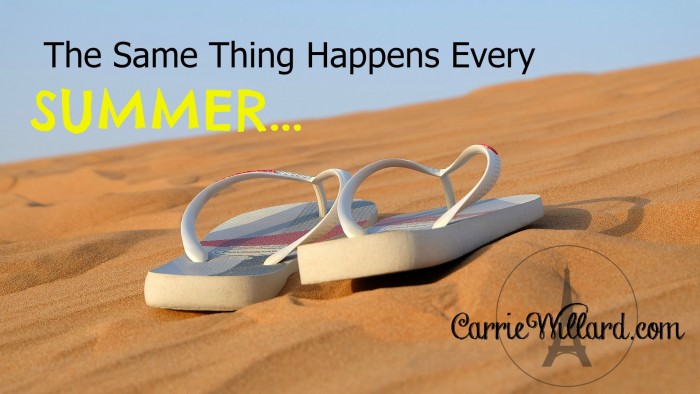 And then they start to get on my last nerve.

This year I didn’t take the time to do this, so now I’m backtracking. I did inform the kids that they would be doing a bit of math every day so they don’t lose it over the summer, and each of them has a bit of schoolwork to finish up (this is by design – doing those last few lessons over the next few weeks will serve as a type of review).

For my husband and me, “bored” is met with the same negative response as a swear word. It feels like a bit of a gut punch. I want my kids to feel bored, but to complain about boredom to either of us is a de facto request for a chore assignment.

Kids these days are spoiled. Heck, I’m spoiled too, I admit that freely. But because they have easy sources of passive entertainment, modern kids are handicapped when it comes to entertaining themselves. Hubby and I reminisce about our childhoods – waking up excited each day to start our various projects.

So yesterday I put my foot down. (Not with a lecture. I don’t do that.)

I had heard enough griping about boredom, enough requests to “go somewhere” (translation: go shopping), and told the children that since I’m up at 5:30 every morning headed to Starbucks to write, they could do all my other jobs.

One child had to be fired from her chore after complaining one too many times (trust me – I’ve had to fire a kid from their chore before, and within days they’re begging to have it back because loss of income is a powerful motivator).

The oldest is off the hook because he is graduated, gainfully employed and a productive member of society (whew! one down, six to go!) and stays busy with his band. 15-year-old went out and procured a job application from a local ice cream shop. 13-year-old made a list of goals she wants to accomplish/things to do when I’m bored list.

Sometimes, a well-timed mommy tantrum does the trick.

I realized that kids, like adults, don’t thrive in an atmosphere of too much leisure. One can only flaneur so much without it harming their health, energy level, motivation, emotional well-being and self-esteem.

I remembered Marmee March’s wisdom. After reading Little Women and marveling about its parenting wisdom, I wrote the following:

When the girls decided to laze about and do nothing for a week during their summer break, Marmee allowed the experiment. Within days, the girls were irritable, nervous and bored – which is exactly what Marmee knew would happen. The linchpin was when she herself took the day off to demonstrate how unattractive selfishness really is. I love what she says here about work:

“…so I thought, as a little lesson, I would show you what happens when everyone thinks only of herself. Don’t you feel that is is pleasanter to help one another, to have daily duties which make leisure sweet when it comes, and to bear and forbear, that home may be comfortable and lovely for us all?“

It would have been easier to just tell the girls to keep doing their chores, but they would never have learned the valuable lesson that….

“Work is wholesome… it keeps us from ennui and mischief, and is good for health and spirits, and gives us a sense of power and independence better than money or fashion.”

I wish I had said those things as eloquently and kindly as Marmee, but hey – she was a work of fiction. I held a quick family meeting and reminded the kids that the adults were working hard on a goal that would have benefits for all of us, and that it would require sacrifices short-term for long-term gain.

Think I’ve got it all covered?

How do you keep the kids from turning into complain-y sloths in summer?