First there’s a backlash, then a backlash to the backlash. Once, wheat was considered the staff of life. But in recent years, research has been pointing out that more people nowadays actually do have bona fide Celiac disease than in years past, and among many others, a condition called non-celiac gluten sensitivity.

Noone is quite sure why this is so. Some say the hybridization of wheat is to blame, that we aren’t eating the same wheat that our forebears did. Others point to the sheer volume of gluten in the diet. (As an example, nearly noone in the West is allergic to rice, but some populations with rice-heavy diets develop that intolerance.) 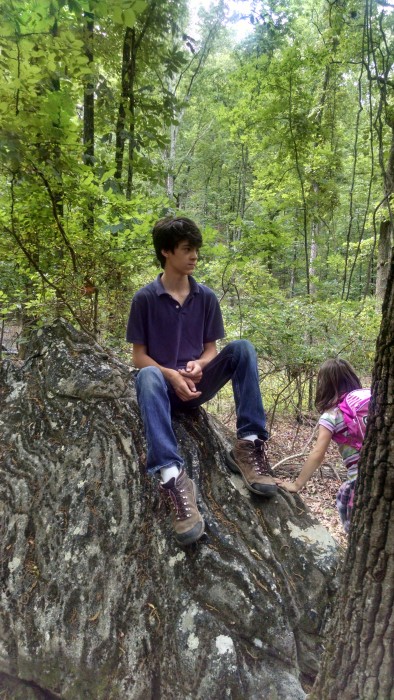 My handsome son. I got his permission to post about him here.

Books, blogs and research papers are legion at the moment about the dangers of wheat: from autoimmune disorders and intestinal damage to symptoms such as headaches, stomach pain, depression and many others. Others say that gluten-free diets are a fad and that wheat is harmless or beneficial.

Several years ago, I began a wheat free diet after extensive tests (blood, skin, and, um… other) showed wheat allergy (as well as cat, which explains why I always began rubbing my nose after entering a secondhand shop). I didn’t notice dramatic effects, so I gave it up. Looking back, I probably didn’t give it a long enough trial. I also didn’t completely eliminate gluten.

Fast forward a couple of years.

After a health crisis my husband began a strict gluten free diet. One year later, he’s noticed some pretty dramatic benefits, the most recent being the elimination of his severe seasonal allergies. After moving from Florida to Georgia 20 years ago, spring time became torture for him.  For 6 weeks or so he would have miserable symptoms: sneezing, itchy, swollen, watery eyes, fatigue, rashes, ear infections, even fever.

I’m generally a skeptic about nutritional fads and extreme diets, but you can’t argue with results.

He also no longer suffers from reflux, and lung issues have resolved. He’s sleeping better and doesn’t struggle to breathe at night. Some other problems, probably related to an autoimmune/inflammatory response, are improving.

I decided to begin the process of testing my children for gluten intolerance. According to Enterolab, where I sent the… uh… deposit, around 35% of people have the genetic predisposition to have a problem with gluten. That population simply cannot eat foods that contain gluten without health consequences.

Years ago, I asked my 14 year old son’s pediatrician to test him for Celiac. He had been diagnosed with reflux and I didn’t want to put him on antacids, feeling that it would just mask the symptoms, not resolve the underlying issue.

My son’s doctor (actually, two doctors by this point) insisted that gluten couldn’t be the problem because my son wasn’t losing weight, a marker for Celiac in kids. They seemed to ignore the fact that my son is quite underweight, despite eating more food than anyone in the house!

Julien started complaining of headaches. And stomachaches. And chest tightness and breathing difficulties. And he developed some other symptoms that could be related to a gluten intolerance.

When he was just a toddler, my son had massive tooth decay. I couldn’t figure out why, as I was always a “health nut” and didn’t do anything different with him than I did with his older brother. I began to wonder  if something was keeping him from absorbing nutrients in the healthy food he ate.

“Julien, did you mail your poop yet?”

There are a lot of crazy things I’ve heard spoken in my home since becoming a Mom, but this one takes the cake.

The test came back positive.

According to Enterolab, a lifelong gluten free diet is the answer to the resolution of these symptoms. There is no “healing” from gluten intolerance. I like how the site puts it: it’s like a positive pregnancy test. You are, or you aren’t. There isn’t a “little bit pregnant”, nor a little bit of gluten intolerance.

Just a few weeks in to the diet, his headaches have disappeared. Another symptom I won’t mention has also disappeared. I’m excited to see how his health normalizes with more time.

I plan on having the rest of the children tested in the next few months. (The tests are pricey and out of pocket.)

As for me, I’m back on a strict gluten free diet.

If you’re interested in the topic of gluten sensitivity, I highly recommend listening to or reading this podcast at Wellness Mama’s site.

And whether you are currently experiencing symptoms or not, if anyone in your family has wheat/gluten allergy or ANY autoimmune disorder (or any of the syndromes on this list), you should strongly consider getting tested or going gluten free yourself.

What do you think about gluten free diets?

If you’re on a gluten-free diet, you may be interested in my book, Gluten-Free and Family Friendly