Frugality is defined as the quality of being economical. I believe it’s a virtue. However, frugality alone often isn’t enough to meet our financial goals. Even though I’ve written about frugality for a long time on this blog, I’ve learned this lesson over and over in recent years.

I’m a naturally frugal person. Even as a kid, I hated spending money and typically chose the lowest-price item when my mom took me out shopping. Therefore, I don’t find reasonable frugality difficult. 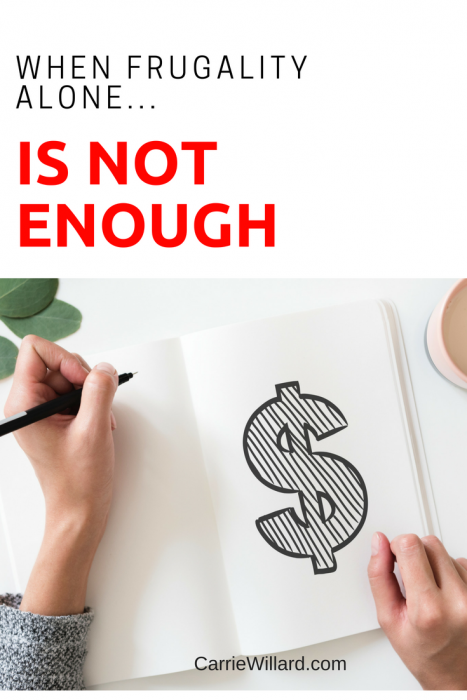 (Interestingly, people might be hard-wired to be either frugal or spendy. Research shows those traits are likely genetic.)

But back to my point. Unless you are a big overspender…

Frugality alone is rarely enough to change your financial picture for the better, long-term.

There are several reasons for this.

One: because extreme frugality is stressful.

Even though I’m a naturally frugal person, that doesn’t change the fact that constantly pinching pennies is stressful. There’s plenty of research to back this up. Being in scarcity mode literally makes us stupid.

Why? Because it eats up so much brain bandwidth. This is irrespective of one’s income. Put a wealthy person in a situation where they have to focus on lack, and they lose IQ points temporarily.

Case in point: when hubby and I were getting out of debt and on a beans and rice budget, one of the areas I tackled was our food spending. Since it was mostly in my control and had an immediate impact, I began doing couponing deals.

It was terribly stressful. It took hours each week to figure out the “deals”. Then to find and clip coupons (whether paper or digital), to print out detailed shopping lists that had NO margin for error. Otherwise the deals wouldn’t work.

It was so bad that after I began shopping at ALDI and found that I didn’t need to do coupons anymore, my children noticed the difference in my mood immediately. They commented on it.

This stress means that extreme frugality may not be sustainable.

It was one thing for us to maintain it for 5 years while paying off hubby’s debts. We had a strong, immediate goal and wanted to act as if our hair was on fire.

But after that goal was met, we were tired of nickeling and diming ourselves all the time. We were tired of shabby old cars that broke down. The fact that we “didn’t have a car payment” wasn’t comforting when we had to donate 3 cars to charity in the span of 6 months. (This is precisely why I started a business.)

Oh, and by the way: getting out of debt is MUCH easier and faster if one raises their income while doing it! This is exactly what my husband and I did during our debt snowball. The extra income made far more difference to our budget than frugality ever could.

Thing three: one can only lower their budget _so_ much before life becomes a total drag.

This is especially true when you have kids. More so with teenagers. Little kids don’t cost much and don’t have many preferences when it comes to entertainment and clothing.

But teenagers do. And their physical needs become far more expensive when they have adult-sized bodies and appetites. It’s all well and good to not be concerned with keeping up with the Joneses when we’re talking about our own consumption. But when the Joneses have teenagers that get to go to the movies and theme parks and your kids don’t, that just sucks for them.

In addition, frugality can be just as time-consuming as earning more money, with less thrill.

Couponing was time consuming. Shopping for used clothing is a part-time job. If a kid outgrows a winter coat or shoes, you can’t just pop in to the thrift store and pick one up. The chances of you getting the item you need in the size you require is slim. Therefore, you have to be visiting those shops weekly.

When you hate shopping with an abiding passion (underbuyer!), this is way unfun.

Earning more money, for me, is way more fun than being a tightwad.

Oh, sure. It was fun at first to go to CVS and get $200 worth of cosmetics and drug store stuff for $20. But it doesn’t compare to the feeling I get from utilizing my talents to grow my business.

Personal finance bloggers often write about the “frugality versus earning more money” question and typically have an opinion that falls more on one side than another. What do you think? How do you balance frugality with earning more money?