I’m terribly sorry for leaving you hanging there.

I think as a distraction technique I’ll post a pic of some really cute babies now. 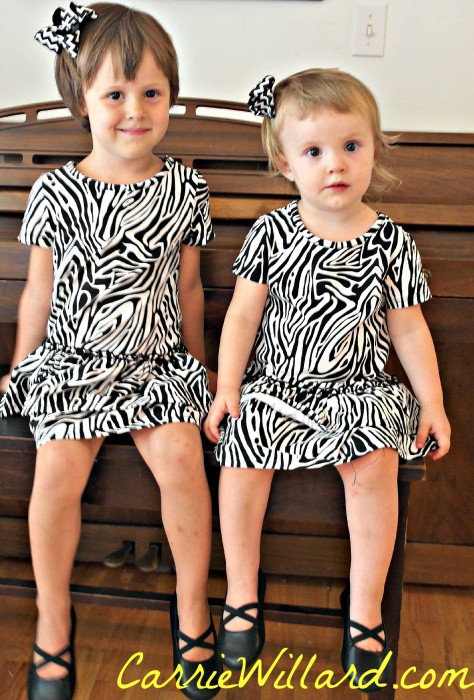 Victoria (right) is finally at that age where she can be a real playmate to her big sister Ruby, who turned 4-years-old yesterday. And it’s a beautiful thing because her two older sisters are usually busy doing big-girl stuff.

Oh what were we talking about?

I woke up feeling quite normal, but baffled. Why didn’t I have all the bleeding I was expecting? I had heard that it was possible to miscarry a baby and not know it at first, that it could take the body weeks to expel the fetus. But typically, once the bleeding and cramping started, it all happened quickly.

Where was all the blood? I hadn’t even had to change my pad since yesterday afternoon. Was I just really fortunate that this was it, that it wasn’t going to be as traumatic and hard on my body as other women experienced? I kept researching online to find out what to expect. I felt anxious for the process to get over with. I was ready to move on my with life (at least, physically).

I couldn’t shake the feeling that I hadn’t passed the baby. I felt convinced that I would have known when that happened.

I felt sad and began putting away things that reminded me I was pregnant.

Caleb was the saddest. Monday night he came into my room and I hugged him for a long time. He pressed angry fists into his eyes in an attempt to stop tears from coming. “It’s NOT okay“, he said.

That night, he wrote a song on his guitar “for me and the baby“. He played it for me that night.

Meanwhile I called my midwife again and told her how confused I felt. That something just wasn’t right. I was convinced I didn’t want to have a D&C unless it was medically necessary, but I wanted some answers.

She told me she would get me in to their backup physician the next morning for an ultrasound. “He’ll be able to give you a better picture of what’s going on.”

The next morning, I got ready and took Ilana with me to his office. (I had seen this Doctor before. In fact, 11 years earlier he had performed an external version on a very large baby in my womb that was content to hang out with her big head under my ribs (ow!) at 36 weeks. Thankfully she stayed head down, and was born – all 10 pounds of her – at home a few weeks later.)

We waited about 45 minutes in his office, which was to be expected since we didn’t have an appointment. It seemed like hours.

When we went into the exam room I quickly explained what happened Monday. I didn’t want to look at the ultrasound screen. I didn’t want to see an un-alive baby in there, or a baby that stopped developing weeks ago and wasn’t a baby at all. But I couldn’t help myself. I turned to look at it and almost immediately after the probe went in I saw it: 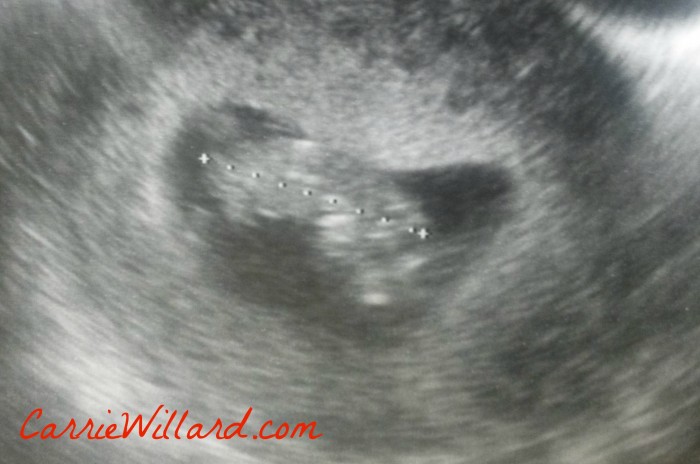 It doesn’t look particularly impressive in the fuzzy picture, but on the screen I could clearly see the baby wiggling and moving. I could pick out its little head, and feet and arms. Ilana began bouncing up and down in her seat, giggling. “I TOLD you, mom!” (Any chance to prove mom wrong is a bonus.)

“Congratulations. You have a healthy 10 week, 2 day old fetus“, said the Doctor.

“but… what happened to me the other day? How can a baby survive me losing all that blood and fluid?”

Then he said a bunch of medical gobbledygook that I can’t remember. I was too busy looking at the feisty little one. I swear I could make out little FINGERS at this point. And 10 weeks 2 days? I thought I was 8 weeks.

Later on I recognized some of the things the Doctor said about what could have happened. It could have been a blighted ovum, (which in a pregnancy with a still-viable baby makes it a vanishing twin), meaning that what I expelled was an empty sac – a fertilized egg that never implanted itself into the uterine wall. What’s amazing to me is that my body recognized this wasn’t a viable life, but managed to protect the baby that WAS growing and developing normally.

We are indeed wonderfully made.