“We need to talk about schedules”, he said.

Him: “We need to figure out a time for you to write.”

Me, not knowing whether to laugh, cry, or vomit: “I honestly couldn’t care less. I don’t have time for it. I can barely shower. I’m not getting any sleep right now. I don’t need to put pressure on myself to do anything else.”

Him: “Yeah, but writing is something that makes you happy.”

Me: “Hierarchy of needs, my dear. Sleep and basic self-care trump self-actualization, babe.”

Second: having a preemie at home is really, really hard at first.

I literally haven’t gotten more than 2-4 hours of sleep since Josiah came home 10 days ago.

The first night, the apnea monitor went off every few minutes all night long. These were mostly false alarms due to us putting the monitor belt and leads on incorrectly, or forgetting that the battery pack can’t be in an outlet with anything else. (!!! How many hours of sleep did I lose before reading that bit of fine print in the manual!?!?)

The second night was a little better, and the next a little better, and so on. I stopped giving him his iron supplement (supposedly de rigeur for preemies, who miss out on the last trimester of pregnancy, when they would be banking iron from mom). He immediately began to feel better. I may get a tongue lashing from the pediatrician about it, but I have some conflicting info to offer on whether he really needs it (insert a link here about what Doctor Jack Newman, breastfeeding champion says about breastfed premature babies….  actually I’m too tired, just Google it.)

It’s not so much that Josiah doesn’t sleep at night, it’s that he’s accustomed to the NICU schedule.

He sleeps too deeply for a while and then wakes up ravenous… not like the typical breastfed baby that naps, nurses, naps, nurses etc… so when he wakes up he gets absolutely impatient for his food to arrive (via bottle, since he only nursed a couple times a day in the NICU), and it’s difficult to get him to latch well to the breast.

Breastfeeding is super complicated right now because I have to pump on one side to stimulate letdown, then latch him, or if he can’t latch bottle feed him, then pump to provide more. Or I have to give him an ounce or two of milk in a bottle to take the edge off his hunger, so he can calm down and latch.

His pediatrician confirmed my observation of tongue tie and recommended an ear nose throat specialist to perform a frenectomy. Hopefully that will improve the situation immediately.

The good news is that he is gaining well despite these problems. I took him to the pediatrician today for a weight check and he gained 9 ounces in 7 days, which is excellent as he should be gaining 1/2-1 ounce a day.

I have been so worried about his weight gain and finding out this news put me on cloud nine. Mother’s milk for the win. I am so proud of myself. Pumping while caring for a newborn is not fun but I’m determined. Right now he can only latch with the help of a nipple shield which is a pain. It’s like a contact lens for the breast and has a way of getting lost in the middle of the night, necessitating a frantic search.  I’m hoping I can wean him off it once the tongue tie is clipped.

Thankfully he really seems to enjoy nursing, especially for comfort, and is an absolute snuggle bunny. He isn’t a fussy baby at all (off the iron), especially since I started giving him probiotiocs.

There is a special kind of anxiety involved with a preemie. Not usually one to panic, I took him to the ER a couple of days ago about an issue that turned out to be a probably nothing/watch and wait” kind of thing. My normal postpartum insomnia is multiplied.

Everyone says the first month at home with a preemie is really hard. 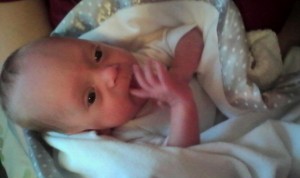