I ate oatmeal, leftover from breakfast, for lunch today.

Topped with blackberries, butter, walnuts, flax seeds and a tiny sprinkling of brown sugar, it was hardly pauper fare. 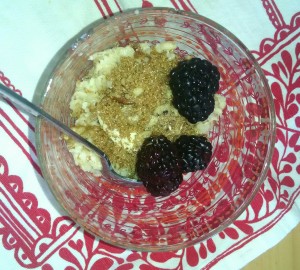 Still, I would much rather have had a hot ham and cheese sandwich (what I served the kids).

I took one for the team.

(I have Katy of The Non-Consumer Advocate to thank for the concept.)

I have been on a mission for several years to slash our food waste. It shames me when I throw out food that has gone bad, typically for one of the following lame reasons:

I’ve always been big on making menus, so lack of planning isn’t the problem. The problem is first world problems.

It’s being so spoiled by the abundance of cheap, easily obtained food that I get to decide what I want to eat, instead of eating what’s available (which is how it is for 90% of the world’s population now, and used to be here for previous generations).

Right now in the first world, too many easily obtained, cheap calories are what’s killing us. Americans spend less money on food than anyone else in the developed world. (As an example, the French spend twice what we do on food as a percentage of income. Yet they eat far better, weigh less and live longer.)

Meaning that this isn’t so much an issue of frugality. My family can easily afford the food we buy. Still, groceries are our biggest monthly expense, greater than housing, and I bristle at throwing away food.

But for me, the bigger issue is food waste as a symptom of laziness or entitlement.

In recent months I’ve changed a few things in an attempt to curb food waste. These things have worked:

What helps you to avoid food waste? Do you think of it as a moral issue, or simply a practical one?

P.S. Occasionally I may come back and post pictures of examples of “taking one for the team”. Expect to see avocados with questionable brown spots, half eaten apples discarded by my 3 and 5 year olds, and other misc.