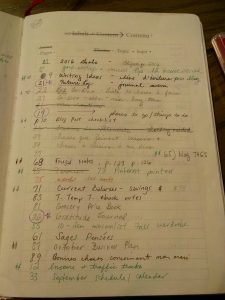 8:19 – I’m at the computer, sipping coffee and checking my Bullet Journal. Baby has been changed and nursed and is content with Julien, 14. Breakfast is ready. Scrambled eggs, sauteed veggies and bacon are on the stove waiting for various bodies to amble into the kitchen to eat.

This will be our first day back to school after a nasty virus rendered everyone much like a character in Sleeping Beauty’s kingdom, collapsed on the couches in the living room. I’ve never seen them sleep so much or act so listless when ill. The doctor said that this year’s viruses are especially virulent.

After the oldest and youngest took a turn for the worse, I took them to Urgent Care where the doctor diagnosed bronchitis for the former and double ear infections for the latter.

Antibiotics are a last resort for me, but they were both so miserable and after a week of this crud, I was ready for them to get some relief (and, I’ll be honest, get some sleep for myself. I’ve spent a week semi-reclined on the couch). The baby has lost nearly a pound, was feeding so poorly he had only wet 3 diapers one day, and Caleb couldn’t sleep for the coughing. So meds it is.

On Mondays, my husband goes to work late so that I can write for a couple of hours in the morning, so I crank out a couple of blog posts.

9:45 – I emerge from my bedroom so hubby can leave. Despite multiple interruptions and internet issues, I did get two posts done.

Ruby, 5, has already started math with Daddy. I need to get the other kids going.

Motivation won’t be high around here today, everyone is still very fatigued. They weren’t this sick during the Great Whooping Cough Adventure of 2013. 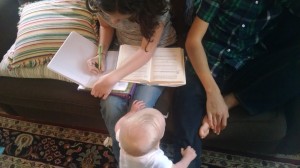 10:54 – The little girls play ballet class, literally the first time they have felt up to playing in a week, so I’m able to do writing with Sadie and history with Julien.

He’s certainly old enough to do this on his own, but it’s his least favorite subject, so he requests mom’s help. My enthusiasm for the topic and companionship do the trick, it seems. 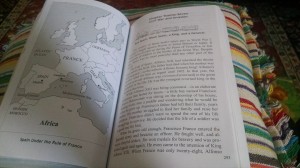 Sadie does math on my computer, Ilana begins math (she’s become obsessed with Danica McKeller’s Math Doesn’t Suck and is working her way through it) and I go make some honey lemonade for the kids to get some Vitamin C in them.

11:11 – Josiah goes into the Ergo while I start nachos for lunch for the kids, a sweet potato for me. I load the dishwasher and throw a cake in the oven. With Ilana and Sadie helping, it takes 5 minutes. It’s a stevia-sweetened Raspberry Frosted Special Agent Brownie Cake from this cookbook. The “special agent” is a can of black beans. Ilana protests, but she’ll still eat it later.

I send Sadie back to her times tables, Ilana finishes up math and Julien does a history test. Caleb is off the hook today. He’s graduating in a couple of months anyway, and is currently reading The Ultimate Hitchhiker’s Guide to the Galaxy

, a 5-inch-thick tome, so that’s enough book learnin’ for someone too sick and exhausted to get off the couch.

11:54 – Big kids are done with lunch and I am still waiting for my sweet potato to cook. I sit down (baby is asleep in the Ergo

) to rest for a minute, drink something because I’m suddenly parched, and ponder the great mysteries of life.

Among them: why do I always forget to start cooking my sweet potato an hour before I want to eat it? 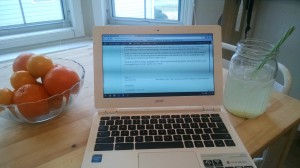 The girls are all off watching a TinkerBell movie. I almost protest this with the big girls, but the four of them are so cute snuggled up on the couch together, that I refrain.

I take quick stock of the rest of the day. Instead of their usual science curriculum, I’m having the girls watch a documentary for health, That Sugar Film

. The boys and I watched it last week. It’s a bit goofy, but pretty compelling. I’m trying to reduce my kids’ sugar intake, mostly by wooing them with delicious sugar-free treats, but also through education.

The little girls eat lunch while Sadie narrates her history lesson to me. It’s about Life in Athens for the Ancient Greeks. See how we do homeschool history here.

Ilana is irritated about having to watch the documentary. “I already did science today!” Ah, well. 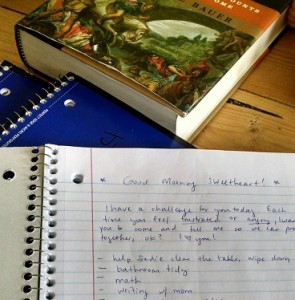 1:03 – Read aloud time. I read with Ruby, then do another chapter of Anne of Green Gables with the big kids. Ruby, meanwhile, is copying down all the titles of her favorite books onto a piece of paper. Victoria plays with wooden puzzles on the floor. 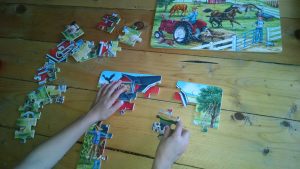 Afterwards, the girls watch the documentary. I set up an art table for the little girls while I unload the dishwasher. 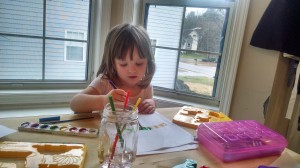 2:14 – Art was fun but then the girls began fighting. I send the 5 year old to her room for a quiet period. My energy and blood sugar starts crashing, so I pop a cinnamon-apple muffin in the oven for myself and Victoria, and make tea for Caleb, Vic and me.

Vic is irritable. This is the first day she’s not been napping off and on all day, and she seems tired. I rock her and read a story.

The big girls and I discuss the movie. We talk about how the filmmaker was impacted physically and emotionally by his experiment, how the health of the Aborigines declined after the introduction of sugar, how so-called “natural” sugars are bogus, and something called Mountain Dew Mouth (this part of the movie made me so angry and sad, I thought I would vomit).

I asked them to tell me how the sugar industry had manipulated scientists into hiding the ill effects of their product.

At this point, the school day is over. I didn’t get around to writing with Ilana and Julien, but noone is feeling fully well yet, so I let it slide.

You do the best you can with homeschooling when everyone is sick.