A nasty virus (probably the flu, since the stricken are bedridden for days with high fevers and severe joint/muscle aches), is currently making its way through my family. I haven’t slept properly in nearly a week, thanks to a feverish, coughing baby who has made me the human pacifier (I’ve been nursing and carrying him around so much, I’ve lost 2 pounds).

We’re closing on a house tomorrow, and Hubby is still weak and recovering.

Such is life. I’ll look back on this and laugh, no?

So in lieu of a proper blog post, which may not be forthcoming for another week or longer, depending on how long it takes for the last holdout to succumb, I thought I’d do some links.

A few days ago I wrote What I Learned From My Spending Fast on AndThenWeSaved (an excellent and fun blog with the neatest retro graphics!). Anna of The Spender’s Guide to Debt-Free Living

is the editor of said blog. (This book is reviewed briefly here.)

The TL;DR of it is: one doesn’t need 17 bras when one is barely old enough to require ONE, I’m not nearly as creative as I fancy myself to be (working on it…) and other lessons. 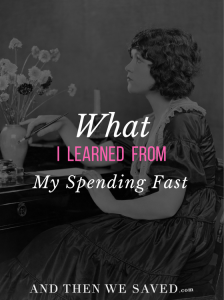 I actually began another spending fast at the end of January and for the whole of February. I’m not buying anything but food and other absolute necessities. Using up everything so I don’t have to pack it.

Why? I need a new couch for my new house. Yes, need. Because my oldest couch with its requisite stains and gum wads smashed in its cushions (which only have two sides so one can only switch them… once) is getting tossed instead of moved, and my next-to-oldest couch is going into the downstairs family room. So my living room will be naked unless I purchase a new-to-me couch.

And while I would be a-ok with foregoing the ubiquitous living room furniture, because sitting is killing, my older parents and other guests (who aren’t as acquainted with my weirdness) might have a problem getting down on the floor to squat or recline on oversized pillows (which would be my preference). 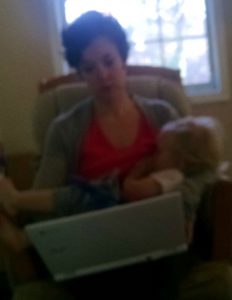 A super-blurry, dark pic the 4 year old snapped of me doing my thing, and Josiah doing his. One consolation is that since Josiah is still nursing, I don’t have to worry about him becoming dehydrated.

Speaking of sitting, I’ve been doing so much of it lately, rocking a feverish young ‘un, I fear my backside is going to be chair-shaped before too much longer.

Again, not complaining – I’m thankful that despite sleep deprivation I haven’t come down with The Nasty. (The last 3 times my family has gotten sick, I stayed well 2 out of those times. I credit my sugar-free diet, and a little tonic called The Singing Canary.) 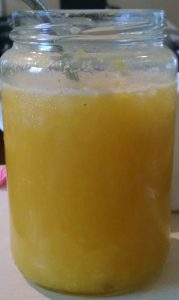 A few old posts that new readers may have missed. These are all silly and fun and I enjoyed re-reading them. I need a little mood boost!

Top 10 Things About Being a Mom from February ’08

Dear Mother, can you hear me whining? (When mom doesn’t answer the phone, at least I still have the blog!) from February ’10