The good news is, my across-the-street neighbors have two little girls visiting for the summer.

The bad news is, my across-the-street neighbors have two little girls visiting for the summer. 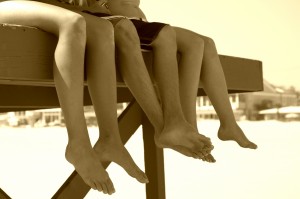 Since their arrival yesterday, they’ve attempted to spend every free moment at my house. I’m pretty sure it’s not my charm that draws them, but rather the fact that there are six kids here all day to play with.

Plus, there’s a trampoline. And a playhouse. And a slide. And a swing. And sundry bicycles, tricycles and other ride-on toys.

And did I mention the six playmates?

In the various houses I’ve lived in since having babies, there have been a few different “neighborhood kids” scenarios. In one situation, two next door neighbor boys ended up being my kids’ school bus stop buddies. Their mom and I became friends. We had a yard sale together, and a margarita afterwards.  She was also a work at home, single mom (a freelance writer – what are the odds?) so we had much in common. Her boys were little gentlemen, and I never had a bit of trouble with them or their behavior.

Unfortunately, other scenarios have been less ideal. Even though I’ve never had a really bad incident happen involving my kids, I’m not a fool. I’ve had enough childhood friends and relatives who have experienced violations of some sort or another, and I prefer to keep my distance until a level of trust has been built and plenty of time has passed.

Our across-the-street neighbors haven’t exactly given us the best impression of them since moving in last year. We’ve had minimal conversation, but it usually involved them coming over to ask for a favor. A jump, some gas, some food… all their requests have been met with good old fashioned Christian hospitality, but it does give us the feeling that they may not have their act together. Especially since there were 3 able bodied adults and no kids in the house, we couldn’t help but wonder why there wasn’t enough money coming into the household… of course, there was money for cigarettes and beer.

Now there are two perfectly sweet little girls staying the summer with their dad.

Although the idea of having neighborhood kids for my children to play with is charming, the reality rarely is. It’s a huge disruption to our routine, which we keep loosely, even in the summer.

I would never allow my children to run over to a neighbor’s home constantly. I would assume that my neighbor had a schedule of her own, and wouldn’t have time to babysit my kid for free.

But more importantly, the way I figure it, if you don’t know me from Adam’s housecat, and yet you are ok with your children spending lots of time in my company without your watchful eye, then you’re either a) very, very ignorant or b) negligent and uncaring. Both can mean trouble.

What happens if one of those girls falls off the trampoline in my yard and breaks an arm? I could be sued.

What happens if one of them decides to get my 3 year old alone to “play Doctor”?

I am not going to play babysitter all summer long to a couple of children whose (very pregnant in this humidity) stepmom might be just too eager to get out of her hair. I have enough kids to care for.

Today, I had to keep creating reasons to call my children inside the house to explain to them, once more, that they were IN NO UNCERTAIN TERMS to go inside the neighbor’s house. Even if their stepmom says it’s ok.

When we went for our walk today, they tagged along. Again – why was their stepmom ok with me taking them off without her? No way would I ever let my kids go off with someone I don’t know well, even if they do have a passel of kids with them.

I want to be as hospitable as the next person, but I don’t feel comfortable letting these kids in my home when I don’t know their parents and don’t know what standards they’re being raised with.

How have you handled boundary issues with neighborhood kids? How do you teach your children the fine art of the brush-off when kids just don’t understand subtlety? And how do YOU as an adult give kids the brush-off without being rude?