I’ve lost a few pounds recently without trying. I couldn’t figure out exactly why my clothes were getting baggy all of a sudden.

It’s not because I’m exercising more.

In fact, I’ve exercised LESS in the last few weeks due to feelings of persistent exhaustion, as I so eloquently expressed in this post.

I’m not sure what I weigh now, but I’m wearing clothes I wore before baby’s arrival. Yay!

I tried weighing myself but the scale read 60 pounds. I’m pretty sure that’s not right. Evidently, a cheap scale can’t handle a 5 year old jumping up and down on it repeatedly. Who knew?

This morning, when hubby brought me a piece of banana bread on a tiny plate, it hit me:

I’ve been eating on a small plate for a few weeks now, and slowly but surely it led to weight loss. 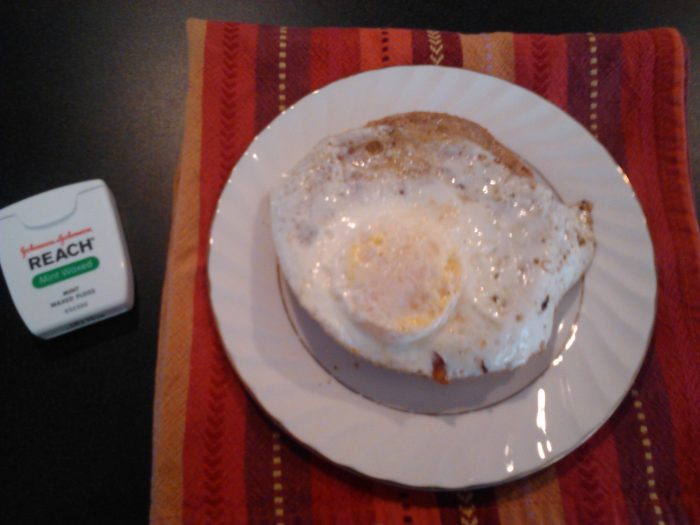 Note: I don’t normally floss during my meals. I just grabbed the closest thing I could find to demonstrate the size of the plate. Someone is in trouble for leaving dental floss on the kitchen table, by the way. As soon as I figure out who done it.

I remembered reading in the book Mindless Eating: Why We Eat More Than We Think

The plate I’ve been eating every meal on is about the size of a saucer. If I’m still hungry after eating everything on my plate, I get more food.

I don’t go around hungry.

I would never do that. It’s not smart for a busy mom to starve herself, especially when she’s nursing.

My sneaky little habit had caught up with me!

Turns out, when it comes to your plate, size matters.

Another thing I learned from the above mentioned book is that much of our hunger is all in our heads. One of the studies that stuck out to me was one in which the participants ate soup from bowls that were rigged so that they automatically kept refilling as they emptied, unbeknownst to the eaters.

Yep. They ate WAY MUCH MORE SOUP than the ones with normal bowls. Yet none of them reported being “stufffed”. Quite the contrary. They felt just as sated as the ones who ate 1/4 of the calories!

I hate exercise, but I force myself to do it. But eating on a small plate? Pretty much effortless!