As soon as I heard about it, I knew I had to read Possum Living.

Unable to find it in the library system (which would have been true Possum style), I ordered the book from Amazon. The day it arrived, I devoured it in a few hours.

Possum Living: How to Live Well Without a Job and with (Almost) No Money

I couldn’t put it down.

Dolly Freed, the author (a pseudonym), wrote the book at age 18. It chronicles her days as an independent young woman, living with her father in Pennsylvania in the late 70’s.

Possum Living is basically about the lifestyle of these two people who choose to escape the drudgery of full time work to live a life of self sufficiency and freedom.

They survived on less than $1500 a year yet kept up a middle class facade (it helped that they owned their home outright). Dolly was unschooled (her Dad took her out of public school at 12 and she educated herself by reading and studying for free at the library), and she and her father hunted, fished, gardened, raised chickens and rabbits, and did whatever they felt like doing.

Possum Living became a cult classic in the late 70’s and was recently republished 30 years later, with an afterword added by an older, wiser Dolly.

Dolly is quite a character, which makes reading the book just plain fun, regardless of the subject matter. She is cheeky, fiercely intelligent, just a tiny bit irreverent, and witty. She reminded me of my oldest child.

I love peeking into the lives of people who are doing extraordinary, unusual things. People who are creating just the life they want, regardless of what others might think.

The book contains a lot of practical information for those who are interested in homesteading or creating economic independence through self sufficient practices. (If you want to distill your own moonshine, buy a house for pennies on the dollar on the courthouse steps, or gut a feral cat, Dolly’s your gal.)

But my favorite thing about this book is its general philosophy.

Freedom and choices – those things are deeply important to me.

Dolly admits that most people won’t be interested in living as high on the “possum scale” as she and her Dad did. But the point is that you can apply Possum philosophies to your own situation in order to become less dependent on the system to sustain you.  As Dolly says, it’s far easier to do without stuff you really don’t need, or learn how to get it for free, and reject the money economy (and the keeping up with the Joneses that’s part and parcel of that) than it is to earn money.  And you don’t pay income taxes on money you kept in your pocket!

I love this message. It’s inspired me.

When I was a single mom, I lived quite well on a smallish income. I was proud and grateful that I could support myself and my children (and still homeschool for most of that time) without holding down a regular job.

Some Favorite Quotes from Possum Living:

Possum living is one of my all-time favorite books on radical frugality. See more here: 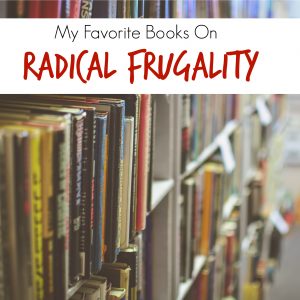 Do you ever feel like a Possum? What kinds of things do you do to be more self sufficient and escape the rat race?