This page continues to be one of the most popular on this site. I think it’s because post ovulation depression is common, but nobody really talks about it. Since writing these posts, I no longer worry about this problem. Now that I know it’s coming each month, I just roll with it. There’s nothing wrong with turning inward for a few days, getting quiet, and taking care of yourself.

It’s more likely that I’m sensitive to progesterone that increases dramatically after ovulation. This would also explain why I struggle with depression during pregnancy, when progesterone levels are very high. Or perhaps it’s the dropping estrogen, post-ovulation, that does it. Right now I have a 5 months old baby who is nursing, and I’m experiencing a few of the symptoms I mentioned below (mild insomnia). Since estrogen is lower after birth and while nursing, that may be the culprit. My cycle hasn’t returned, so I’m not ovulating at the moment.

So far I’ve found that the best thing I can do to feel better any time, is to a) spend time outside every day b) exercise daily and c) eat enough food. I eat more carbs now than I did previously, and for me that is a positive change.

The original article is below. [end of edit] 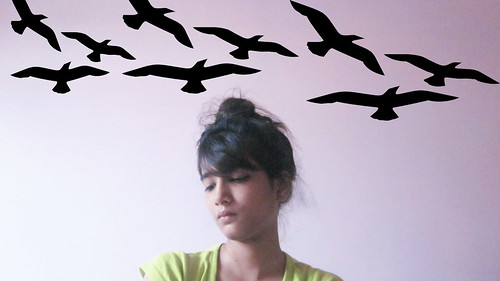 Have you ever had a health issue, whether physical or mental, that really confounded you?

I have been experiencing what I call “post-ovulation depression” for a couple of years now.

Ever since my cycle returned several months ago after having the baby, I’ve been trying to find answers. I’ve read books, Googled it, talked to friends.  I turned up nothing. The best I found was a message forum post or two where another woman asked the same question I was:

“Why do I feel sad immediately after I ovulate?”

I feel great during the first two weeks of my cycle – I’m energetic, motivated, sometimes even hyper. Stresses don’t bother me as much and I’m much more able to tackle the problems that come up. I also sleep better during this time.

But then, quite literally the day after my peak ovulation day (I know this information because I chart my cycles for Natural Family Planning), I fall into a hole.

For the next 4 days or so I am depressed. It will ebb and flow for the next two weeks, a couple of up days and a couple of down days. During this time I feel tired and I sleep lightly – every little noise wakes me up. Then, I feel better instantly once my period begins.

I do have a family history of depression so I’m careful to pay attention to symptoms like this. However, this isn’t bipolar, anxiety or clinical depression – it’s totally hormonally related and completely predictable based on my cycle.

This is very frustrating to me.

I am a very positive person who takes good care of herself. I exercise daily, I drink a little red wine, I eat well. I’m at my ideal weight. I don’t have any other symptoms of depression (sleeping too much or too little, eating issues, etc).

I’m generally a happy, positive person who is able to meet her goals and has a zest for life. I just had a complete physical and everything checked out – my iron is great, my thyroid is fine. I’ve tried progesterone cream but other than helping me fall asleep more readily, it doesn’t seem to help the mood changes.

I finally sent a desperate sounding email to Dr. Heather, a naturopath.

She was gracious enough to send a lengthy reply.

To paraphrase, she suspected that my serotonin levels might dip too low during my luteal phase (that’s fancy talk for “after you ovulate”).

“At times during your menstrual cycle (it is usually mid cycle – after ovulation) the chemical level of serotonin may decrease.

Serotonin does many things in the body but one of it’s important job is elevating our moods. My guess is that your serotonin levels are low during this time making it difficult for you to feel your normal zest for life.

The best way to increase serotonin levels is to begin eating tryptophan rich foods as tryptophan will convert to serotonin in the body. Try doing this from ovulation to when your cycle begins. I have a list of tryptophan foods here.  I also recommend the book by Carol Hart, Secrets of Serotonin

I read the Serotonin Solution book, and it was certainly interesting and enlightening (did you know that serotonin turns into melatonin in the evening? They’re the same hormone!), but it confused me because it recommends a very high carb, low protein/fat diet.  The author recommends only eating one meal with protein every day, at dinner. I don’t think – I know that wouldn’t work for me.

I also re-read The Mood Cure: The 4-Step Program to Take Charge of Your Emotions–Today

by Julia Ross, and it recommends the opposite to boost serotonin levels – a high protein/fat, low carb diet.

Then I read Potatoes Not Prozac

and it said something similar to The Mood Cure – with the twist of recommending eating a high carb snack (baked potato, no butter) at night to increase brain serotonin levels while you sleep, which hopefully will spill over into the day.

I decided to begin a mood/food diary to see how food might be affecting me, and whether my carbohydrate intake during my luteal phase affects symptoms. Incidentally I DO crave rice and bagels when my serotonin is low – but I don’t know if eating those foods would be helpful. When do we give in to a craving and when don’t we?

Also, I tried taking tryptophan (an amino acid that is a precursor to serotonin) in the luteal phase of my cycle for a while. After doing a bit more digging, I found some information on Wikipedia‘s tryptophan page that pointed to a connection between low serotonin and Seasonal Affective Disorder (which I’ve experienced for years!) and a little something called “premenstrual dysphoric disorder” – which incidentally describes my symptoms to a T- just more severe than I experience.

The tryptophan helped me sleep better, but it made me feel a little “high”, like I’ve had 2 glasses of wine. I don’t like that feeling, so I quit taking it.

In the meantime, I’ve been looking for all the ways you can boost serotonin levels naturally. That’s tomorrow’s post!

p.s. Reading up on serotonin has left me with the conclusion that low serotonin may be inherited. My 10 year old son seems to be affected by a phenomenon known as “sundowning” (I didn’t know there was a name for it until recently). He often comes to me in the early evening around dusk and complains of being “sad for no reason”. Turns out this is related to the drop in serotonin levels we naturally experience as the sun goes down, to prepare our bodies for sleep. Maybe some people are very sensitive to this change? I’ve always hated dusk, and my mom has told me she experiences the same thing.

As I mentioned earlier, knowledge is power. Knowing that I’ll experience a monthly downshift in energy and mood means that I’m not surprised by it, nor do I pay it too much attention anymore.

I use this time to think about my choices, to journal more, and I make sure I spend plenty of time outdoors and moving my body, which are my two most important mood stabilizers.

Don’t be a stranger! If you enjoyed this post, sign up for my weekly newsletter. You’ll get access to exclusive content including instant downloads of my The How (and Wow!) of Habits printables. These will help you create the life you want with less time and effort.

You might also enjoy: How I make money from home