I got an email yesterday and thought it was a perfect time to revisit this topic, since it was almost exactly one year ago that my family came down with Whooping Cough (Pertussis). 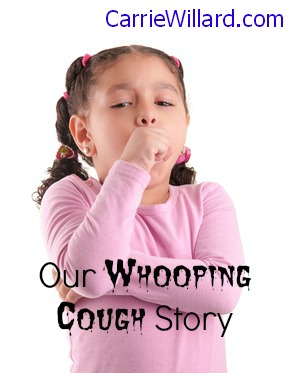 “Would you recommend vaccinating after dealing first hand with Pertussis?  We have not vaccinated our 4 month old, but (I won’t lie) Pertussis keeps me up at night.  I too have the Vit. C protocol and would love to know how you thought it worked.”

[First, a disclaimer. I am not a health care professional by any stretch of the imagination. I am willing to share my story and my research but the vaccine issue is a complex one, and everyone must make a decision they can live with. This post is by no means to be construed as medical advice!]

I don’t regret not vaccinating in the least.

And now that my girls have had Pertussis, I’m so glad they’ll be able to pass immunity along to their babies when they have them.

The worst thing about Pertussis was the sleep deprivation.

I woke up hourly every night for a few weeks. (And like the mom who wrote, Pertussis was for me the scariest of the childhood diseases, which is why I frequently reviewed the symptoms when my kids would develop a cough, which is why I was able to diagnose it so quickly in my stepdaughter as I described here.)

The Vitamin C protocol was amazing.

My husband and oldest son got a bit of the “scoots” from the Vitamin C, and so they would slack off the dosage and start coughing. I always knew they weren’t taking enough when I heard them cough! The rest of us didn’t have that effect (and for me, it’s a blessing lol).

I would say the Vitamin C reduced the coughing by 50%.
I mostly worried about my youngest, who was 7 months old when we came down with Pertussis. Pertussis can be scary for young babies under 6 months, with more complications.  While she was sick, I stopped giving her solid foods and just nursed her and gave her the Vitamin C with a medicine dropper. She honestly wasn’t as bothered by the coughing as I was. She would coughcoughcoughcoughcough then go right back to playing.

During  a coughing fit, I would turn her around with her back to my tummy and hold her with my hands in front of her belly supporting it, with my fingers interlaced… almost like a gentle corset to give her something to cough “against”. She did develop a small hernia, and her Pediatrician said it would heal on its own as she became more upright. She has had no ill effects from the Pertussis since.

I couldn’t advise anyone else on what to do, as everyone’s situation is different. But I’m glad we got Whooping Cough. Now I don’t have to worry about it again. It wasn’t as scary as I thought it would be. Inbetween coughing, we mostly acted and looked completely normal.

None of my kids struggled to get their breath. During the worst of the coughing, their faces might turn red, but they rarely “whooped” (which is the sound of the gasp for breath after the coughing).

Interestingly, none of the kids got sick for an entire 9 months after we had Pertussis, which is highly unusual for a family of our size. Last winter we didn’t have any colds or coughs, and my husband’s allergies disappeared entirely last spring (his body was no doubt too busy with the Pertussis to react to the imaginary threat of pollen).