Today was a good day, the best I’ve had in I’m not sure when.

Josiah is a month old today, and for the first time, I am no longer drowning in fear that he’s not going to make it.

Today after we did kangaroo care, the nurse and respiratory therapist put him back into his isolette, but first removed his CPAP headgear and nasal prongs so that I could snap a photo. 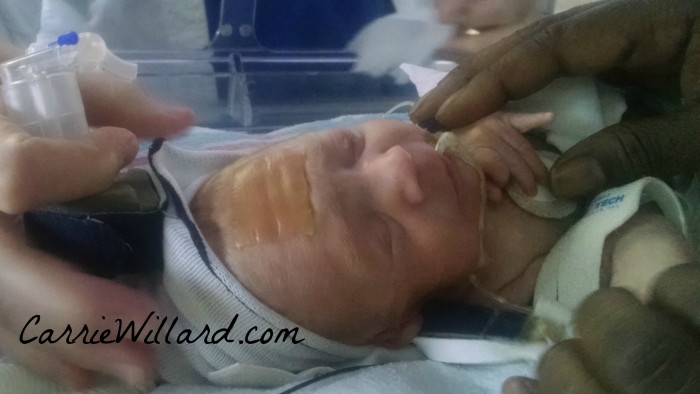 He’s finally starting to look like a tiny little newborn… complete with cheeks!  Last week his PICC line was removed. He gets his vitamins and iron in his feedings now. And his caffeine. That made me laugh. I told him I like my caffeine with milk too!

They tell me that in two weeks, possibly, he’ll be able to get off the CPAP that obscures so much of his face. 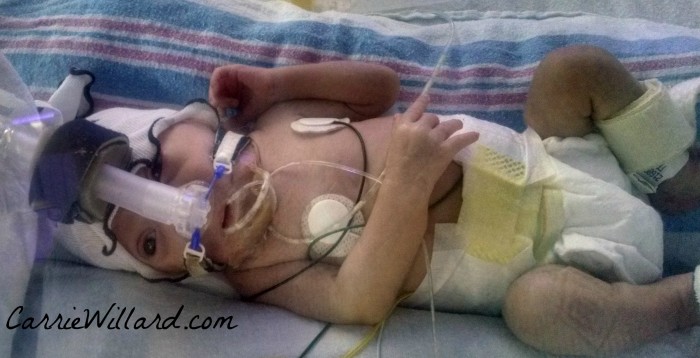 In a week and a half or so, he’ll be moved from the isolette to a “big boy” open crib. I’ll be able to dress him. And I’ll be able to attempt bottle feeding him my milk. I hate that horrible tube, even if it’s given a French name like “gavage” to pretty it up.

This month has been the hardest of my entire life, but it really has gone by quickly. There’s a good chance that Josiah will be able to come home in a month’s time. It feels like forever, but I know I can get through it. A month has already passed – a nice, solid period of time.

Enough time for a baby born 3 months before his due date to finish growing.

It’s still so hard to leave him each day. I suspect it will only get harder as he wakes up to the world more and doesn’t immediately fall back to sleep the moment he’s put back in his isolette.  There are often older (ha! – older – meaning 36 weekers) babies in the NICU fussing and crying and it tears me up. They just want their mommas.  That will be my baby in a few weeks, old enough to know – hey – I got a raw deal here. Something’s missing.

In order to get through my days I have to compartmentalize. I have to avoid thinking too much about him, lest I feel the full impact of not having my newborn son with me. It’s a terribly sad feeling if I indulge it. It hits me at odd times, and I have to escape to be alone before I embarrass myself. Last night it hit me and I had to leave the building and sit in my car.

The other day at the NICU, I had another of my “let’s burst into tears and be embraced by random strangers” days. This time, not one but TWO nurses held me while I cried big gut-shaking sobs. That’s a new record!

Sometimes I get this horrible sinking feeling that I’ve forgotten something important. It feels like waking from a nightmare. And I suddenly remember: oh, right. I had a baby.