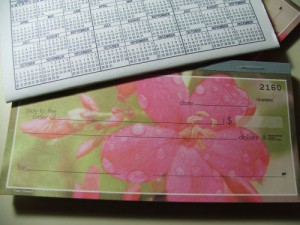 Yesterday I observed a somewhat curious thing. My 12 year old son keeps a spending journal. What’s odd is that I also have a habit of tracking every penny I spend. I don’t recall ever discussing this practice with him. I think he came up with the idea on his own. Which makes him a little nerd like his mom. Cool!

Here’s a picture of his spending journal. He keeps track of his income as well. 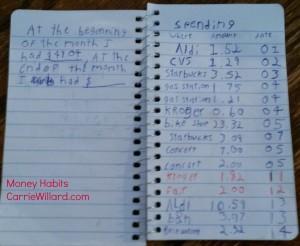 This habit has shown to reduce your spending the same way a food diary decreases eating. Because journaling about an activity increases mindfulness, you’re more aware of your habits and therefore make more thoughtful choices.

I recently read an excellent book. It’s ancient really, a best-selling classic in the area of personal finance,and I don’t know why it took me so long to get around to reading it. It’s called The Richest Man In Babylon

. One of the money principles that’s underscored in the book is that of saving before spending, of paying yourself first.

Pay yourself first (and automate the process)

It’s been said that money is for managing, not for spending. It’s easy to think of money that comes our way in terms of how we’re going to spend it. But really, we do better for ourselves when we think of how our money should be managed.

Why shouldn’t we, our long-term interests, be put at the forefront, before the creditor or whomever? And yet it’s not easy to get into this good habit of setting aside savings when we have money in our account. That’s why I’m a huge fan of automatic transfers. I have several of those set up in my account, so I don’t “feel” the money coming out, it just does. And it’s encouraging to see the balances of my savings and investment accounts grow.

Budgeting is another good money habit.

My husband and I do budget meetings at least once a month, sometimes more. We discuss expenses that are coming up. We tally up our spending for the prior period. We look at the dwindling balances on his debts. It’s been a good tool to help us communicate about money, but also about life and our dreams and goals.

Of course, these good habits can be derailed by bad ones! Paying bills late due to disorganization or procrastination is a bad money habit. It’s the so-called “stupid tax”. I’m also a fan of automatic bill pay for this reason.

What are some good money habits that have made a positive impact on your finances?