Awhile back, I wrote a post here about my middle daughter’s picky eating. Her eating habits were partially my fault, as I let things slide in the food department when I was pregnant with #5. Instead of insisting on her eating what the rest of us ate, I sometimes let her make her own food. Big mistake. 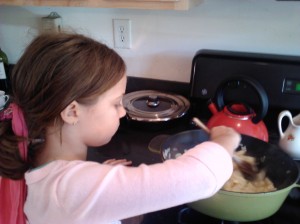 I became determined to help her cure her picky eating, and now 2 years later, she is doing MUCH better. Not only is she eating a lot more foods, but she is much more tactful when she’s served something she doesn’t like.

Reading Bringing Up Bebe and French Kids Eat Everything really challenged me and confirmed my beliefs about food that I had not been ready to implement. 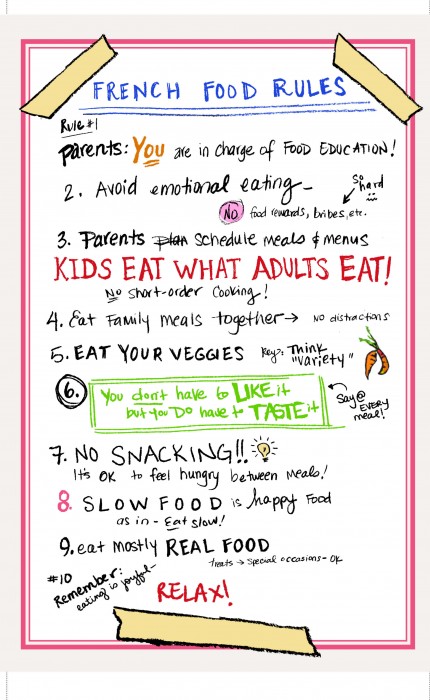 For some time, it had bothered me that my kids had a “free for all” mentality about the kitchen.

In France, parents are in charge of food. Most American parents think that children need to snack every couple of hours, and that idea is supported by our favorite celebrity Pediatricians. I remember where this idea came from in my parenting journey – none other than attachment parenting guru Dr. William Sears. While I love his other ideas, the suggestion to let toddlers and preschoolers “graze” constantly probably led, in part, to my children’s developing tooth decay at a young age.

This constant snacking is also partially responsible for the increasing weight problems American youngsters have. Think about it: everywhere you see parents, you see snacks. It seems that noone can even run an errand with a child without taking food along to keep the child sated. I really think this is a bad habit that creates poor eating habits later on in life. Food=distraction, a remedy for boredom. Americans are constantly snacking, and the results are obvious.

So after reading these two books and talking with hubs, we make a family pact to eat only at approved times: breakfast, lunch, teatime (“gouter”) and supper.

It’s not that we starve our kids, it’s just that we encourage them to fill up at mealtimes and let their bellies rest inbetween. When you have a large family, what might be tolerable for one or two kids becomes intolerable when there are several.

Having 7 kids snack whenever they feel like it with no regard to our family schedule or budget is chaotic. It also creates many extra messes.

So that was the first change.

Then, we had conversations about how to tell mom we didn’t like something we were being served. The kids are great about thanking me for cooking a nice meal for them, but occasionally the picky child would loudly complain about the offerings. We gently pointed out the proper way to tell me that you don’t like something: 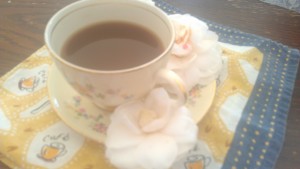 Limiting snacking meant that kids arrived at the table hungrier.

This was especially helpful with the toddler, who was making mealtimes a nightmare with bad behavior. Ensuring that she was truly hungry when we sat down to dinner meant that she would EAT instead of pestering her daddy and creating Oscar-worthy drama.

Initially they complained of being hungry inbetween meals, to which I would cheerfully reply, “Good! Hunger is the best spice!” I said that often enough that they quit complaining. 😉

With the 10 year old, I also stopped letting her prepare alternate food for herself. In addition to pickiness, she has a sweet tooth and has trouble with self-control (meaning, if there is anything sweet in the house that’s meant to be doled out a little bit at a time, she will sneak and eat it ALL). We had to work on that too.

Another change we made was enforcing a “polite bite” rule.

I don’t ever require the kids to finish everything on their plates. In fact, if I’m serving something I know a particular person doesn’t care for, I give them a tiny serving, or even a teaspoonful. But they do have to TASTE the item in question.

After many months of this, I’m pleased to announce that the former 8 year old, now 10 year old, is no longer in the category of “picky eater”. At least, not out loud. 😉

She willingly eats: mushrooms, shrimp, onions, parsnips, turnips, greens, broccoli, green peppers, brussels sprouts, asparagus, leeks, and even liver (though I usually sneak that last one into the food, she knows it’s there).

I memorized the phrase “You don’t have to love it, but you do have to eat it.”

We talked a lot about how food is a blessing, and how for most of history, people struggled to get enough food. And how it’s still that way in much of the world. I also shared that there were things I didn’t love, but I sometimes ate them anyway because other people liked it, and because it’s good food.

And I ate a beet.

That’s a big deal, because beets are literally the only food that I cannot stand.

But I ate it, and it wasn’t that horrible. I roasted the beets in the oven with olive oil and salt, along with potatoes and carrots, and found them palatable that way. Which brings me to my next point:

Try it served another way.

Even when my kids know there is liver in a dish, they still eat it, probably because it’s been served to them enough times. If your child hates a particular food, keep it on the menu rarely – in small portions, and served different ways. And require “just one bite”.

This one is a biggie. At certain times, it’s hard when your child rejects food you’ve lovingly prepared. Keeping emotions out of it prevents mealtime from being a warzone. That’s stressful for everyone and it only makes the picky person dig in more. Take a deep breath and remember that most kids grow out of pickiness no matter what you do. (But educating their palate in the meantime is still the right thing for several reasons.)

It helped me to reframe picky eating from a “discipline” problem to an “education” problem. In other words, my child was picky because I hadn’t educated her taste buds properly. (Incidentally this is how French parents view food – as a matter of training and education.)

I made it a point to put my arm around my daughter and thank her for eating a food she wasn’t crazy about. It really made a difference for her. Mealtime came to be a good type of challenge for her and a place for her to feel good.

More posts about kids and eating:

Helpful books on how to cure picky kids: