I used to talk a lot about frugality here. In the last couple of years, that changed. In my own life, I realized I hadn’t focused enough on earning more income. So I wrote about why frugality isn’t enough, I shared that I was reading 17 books in 2017 on personal finance. And I wrote about investing small amounts of money.

But recently, our family has had to work on saving money again. Hubby had a stroke a year ago, and we’re still paying off medical bills. I also had some bills I was working on paying off. And then, two months ago our mortgage payment went up over $400 overnight (local tax increase).

I’m thankful that during different points of my life, I’ve learned how to live on less. Frugality, even extreme frugality, can be fun when you’re working on a goal. (It kinda bites when it has to go on and on forever!)

So in the last two months I’ve gotten super cheap again. Here’s how.

The grocery budget is one easy way to get fast wins in the spending category. My family, being larger than average (there are 9 of us and we often have extra kids over), spends a lot of money on food. Even though I cook and avoid packaged foods, we still spend a ton.

I decided to do a couple of things to reel in the food spending.

Firstly, I started going back into ALDI to shop the sale items. Even though I love using Instacart and don’t find that it increases my spending, it’s not possible to shop the sales using Instacart. Also, I realized that because I’m not physically swiping the debit card, I experience less “pain of paying”. (Google it if you want to know what that means! Turns out we experience activity in the pain centers of our brain when we pay cash, less so when we pay debit, and no pain at all when we swipe a credit card. Explains a lot!)

So last month I only ordered mainstay items (bread, butter, eggs, milk, etc) from Instacart, but went into the store to take advantage of the sale items.

Secondly, I challenged myself to use up everything in the freezer. I had a dozen packages of frozen ground turkey, which my family has patiently been eating while we work through it. (Note to self: the family hates ground turkey. Don’t buy it again.)

A freezer challenge is pretty simple. I write down everything that’s in there, then plan meals around those ingredients, doing my best to buy as few items as possible to round out the recipe or meal. It does have the effect of working those “creative cook” muscles. 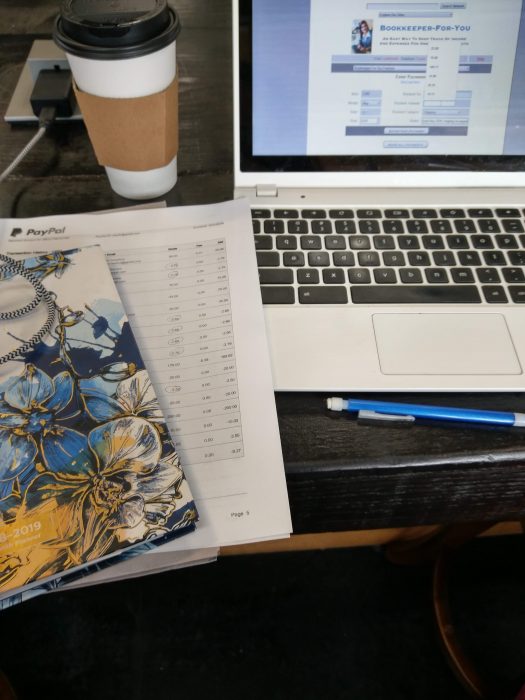 Buying myself that latte did have the effect of giving me the energy and motivation to get through several months’ of bookkeeping! 😉

January and February (and now, March) have been no spend months. The only purchases I’ve made were needful items for the big kids (clothing, personal care items, haircuts). I stayed out of coffee shops (except for last week when I treated myself to a latte while working on my taxes for a few hours). No clothing purchases. I didn’t get my toes done. I did buy Rachel Holllis’ new book, coming out in March. But that’s it! 😉

Funny how spending money can become a habit. And not spending can also be a habit. When I decide not to spend any money at all, I don’t have any decision fatigue. The decision has been made for the month!

My clothing has begun to get even too minimal even for me. I had to throw out a pair of flats that blew out, and a couple of shirts that developed holes. I’ll break the spending fast to buy a couple of spring wardrobe items.

What’s your favorite way to tighten your belt for a bit?