(Note: this is a post about my experience using a Lact-Aid nursing system after my 27-weeker preemie was born. I mostly share my feelings here, but if you have any specific questions please leave them in comments or email me privately if you prefer and I will answer them.)

Yesterday I got an email from the mother of a preemie. She just took her baby home from the hospital and sounded desperate. She asked me about exclusively breastfeeding her preemie, and whether she should listen to the doctors who insist she give her son a formula supplement.

It’s funny, because like so many other things that happened around my son’s birth and NICU stay, I forgot until that moment that I used to use a Lact-Aid nursing supplementer.

The Lact-Aid: my frenemy. I hated it and yet was deeply grateful for it all at the same time. I resented it and fought it and was ashamed of it, yet I may not still be breastfeeding my son if it weren’t for its simple technology.

Sometimes I forget about the stress, fear and anxiety I went through that is par for the course for the mom of a preemie, and then something brings it all back for me. It could be a smell (that astringent odor of alcohol in hand sanitizer), walking down a long corridor, or something someone says to me.

Every so often I meet another mom who tells me her preemie story, and I share mine. It’s a secret club with a secret handshake or door knock. We carry this little bit of scar tissue around our hearts all the time and when we recognize the wide-eyed look of another mom who knows how birth and death can get all wrapped up in each other, we can’t help but let our stories spill out.

So when this mom emailed me yesterday I remembered that I forgot to write about the Lact-Aid and how it was an important part of being the mom of a preemie that I was all too eager to forget.

When you’ve breastfed six babies without a hitch, spent several years as a volunteer breastfeeding counselor a la La Leche League and known amongst your girlfriends as “the Boob Lady” (the one they tell other moms who are struggling to call), you never imagine that you’ll watch your vulnerable preemie struggle to gain weight on your milk. Breastfeeding was/is a crucial part of my mothering identity.

Talk about adding insult to injury. First your body wasn’t adequate to keep your baby in the womb long enough until it was safe for him to be born (when you’re having a bad day that’s how you see it, hopefully you have more good days than bad, when you can be proud that you kept your baby alive and stayed pregnant for months without amniotic fluid, when you feel like a hero), but then you fail at nourishing him?

What a kick in the gut. The guilt and shame of this were overwhelming.

When my son came home from the hospital, he gained 9 ounces in just a few days. I sent a text to the nurse who corresponded with me at the NICU. I was so proud and so happy. I didn’t have to give my son formula, something I didn’t want to do.

But then something happened.

For one, nobody told me that once I had baby home, I should continue to pump even though Josiah seemed to be latching well at the breast. Preemies just don’t have a very strong suck and they also sleep more than a term newborn. They can’t stimulate the milk supply as well as termies.

Not to mention, everything about a preemie pregnancy and birth are pretty much fubar, making it doubly hard for a woman’s body to respond properly to the correct stimuli in the first place. Hormonally, everything is whacked. The breasts don’t have 9 months of correct hormonal stimulation to promote re-growth of milk-making plumbing, the fear and anxiety around the delivery and baby’s well-being in the NICU aren’t compatible with the operation of breastfeeding hormones… I could go on.

Secondly, my son had a tongue-tie. We had a frenectomy procedure but afterwards, he went on a nursing strike and refused to eat anything at all, whether from breast or bottle, for 24 hours. Talk about panic.

Once we got over that hump, I thought things would improve, but they didn’t. He continued not gaining weight despite my taking galactagogues, including prescription medication, a visit from a Lactation Consultant who assured me that we were doing everything right, and cranio-sacral therapy sessions and chiropractic adjustments to help his mild torticollis.

I started pumping again so Josiah could at least get supplemental breastmilk via a plastic fingertip syringe (which was not fun, I was either nursing or pumping or finger-feeding him every moment of the day, it seemed).

Researching for hours every day, I came across nothing that assured me that preemies can thrive on breastmilk alone. There were a few anecdotal experiences on message forums by individual women, but no medical studies or research. In fact, I found the opposite: the reason doctors universally recommend supplementing breastfed babies with preemie formula is because they almost universally don’t gain well on breastmilk alone (especially very early preemie).

That didn’t exactly boost my confidence.

I cried. I raged. I screamed at my husband once. (Not proud of that, but when one is being awakened by a heart/oxygen monitor every few MINUTES all night long, one is not in their right mind.) 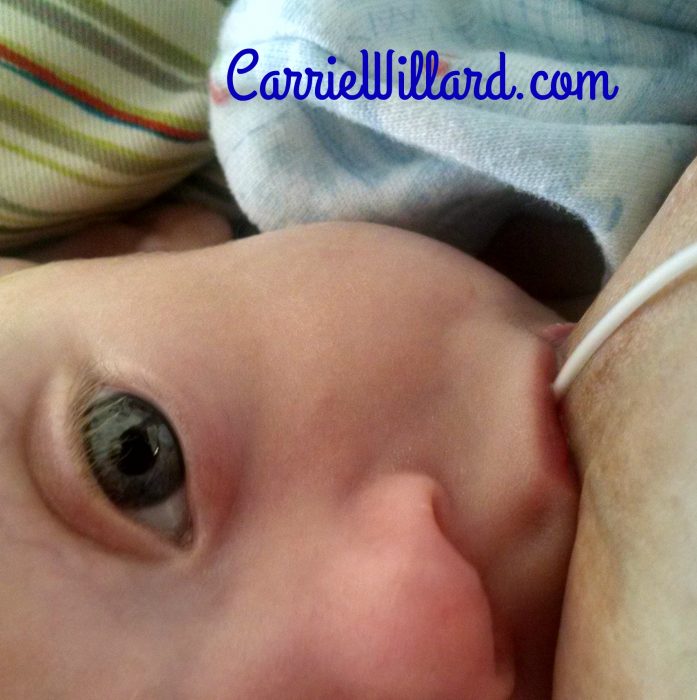 Finally, I gave up and compromised. I first used a starter Medela supplemental nurser. It’s marketed for temporary use, but it’s not really temporary, you can easily wash it out and reuse it indefinitely. The SNS wasn’t as easy to use nor as discreet as the Lact-Aid. It was also much more likely to “explode” and leak all over me. This only happened a couple of times with the Lact-Aid, and it was due to a very wiggly, grabby-hands baby, not a flaw of the system itself.

The Lact-Aid nursing system, was far easier to use, much less likely to leak, and much more discreet. I was able to use it while nursing in public and noone was ever the wiser. That would have been impossible with the Medela SNS.

Making peace with the Lact-Aid for breastfeeding

I think the thing that helped me make peace with giving my son supplemental formula was taking a long-range view. I wanted to breastfeed my son for years, not months, and if a little formula was going to help us get there, it was an acceptable compromise.

Still, I struggled emotionally. Giving a baby formula was something I had never done, and I had to rework my vocabulary around it. Learning to use the supplementer was easy, but overcoming the emotional hurdle was painful. I had to overcome the visceral feeling that I was somehow poisoning my son.

Nothing about having a preemie is easy, but the pain, anxiety, guilt, grief and fear do slowly fade. I post a picture on Instagram of some new accomplishment of my son’s and every once in a while someone, usually another mom of a preemie, comments “remember when he was so little and we were all so scared?“.

I still cannot look at pictures of my son’s first few months of life.

I retired my Lact-Aid supplementer

permanently a few months ago. I had fantasized about burning it with great ceremony, but it didn’t happen that way after all. In fact I found it a couple of days ago in my refrigerator, empty and stuck to the bottom of a shelf. I peeled it off and tossed it in the trash without fanfare.

Having a preemie has changed me in ways I’m still unpacking. Nothing can ever be taken for granted. Nothing is normal. Every little normal thing is a miracle.

Including having a 27-weeker preemie who is still breastfeeding at 21 months. Looking back on the experience, my only regret is not starting with the Lact-Aid supplementer earlier!