Well little one, it’s not just your mommy that has the nightmares. Daddy has them too. Last night he sat up in bed and said, “Where’s Josiah?!“. I calmly told him you were safe in the NICU. When he woke up he said he dreamed that we took you home, but then couldn’t find you.

When I went to visit, you had new digs! They moved you to a different isolette. It’s an upgrade really. This one doesn’t have the moist air in it, which means they think your skin is adjusting to normal room air and don’t need it anymore. You were lying on your side with your arms under your head, sleeping like an angel. 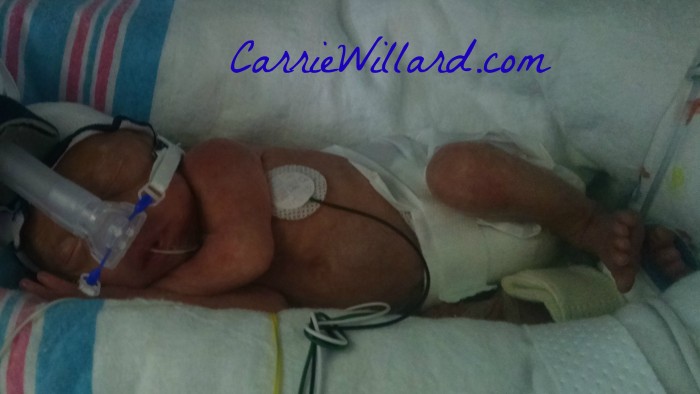 You’ve been pooping up a storm! While I was visiting with you, you had two poopy diapers. I was so happy about that because I got to change you both times. But then your nurse told me that they were ordering another X-ray of your intestines. The first one was worrisome.

When I got home, the Doctor called and said that you had blood in your poops, and that they started you on antibiotics, and were stopping your feedings. Then they said that dreaded word: NEC (necrotizing enterocolitis). That’s the thing that mommy has been so terrified of. They are keeping an eye on things and will give you frequent X-rays to monitor it.

We had such a nice visit.

But you seemed unusually sleepy today, and you didn’t start kicking when you heard my voice. I was worried.

I held you for a long time, while the nurse gave you your last feeding. As the milk went into your tummy, you started smacking your lips and making little sucking motions. I gave you another Q-tip breastmilk “popsicle”. I want you to figure out that mommy is the source of that yummy food filling your belly, and that there is much more where that came from. Towards the end you opened your eyes wide for several minutes to look at me. You were tucked inside my shirt, holding on to my bra as if for dear life. It was totally adorable. I would post a picture here, but I’m not in the habit of putting pictures of my bra on the internet.

Eventually you’ll have to learn how to get your milk straight off the tap, which will take several weeks of very difficult practice as you learn to coordinate sucking, breathing, and swallowing. But it will happen! Little Zach, the baby who was next to you, went home yesterday. I was so happy for his parents and him but a little sad that I wouldn’t be seeing them again.

Today I went from being on cloud nine to absolutely scared for your safety again. They don’t call it the NICU roller coaster for nothing. Daddy is with you right now and he is so worried. Please keep fighting little one. You’ve already been through so much. We love you so.

Today I took your siblings grocery shopping for the first time in two months. Julien said to me, “Mom, it’s so nice just going shopping again with you. I really missed that.”

I understood exactly what he meant. I am finding so much pleasure in the most ordinary, mundane of activities lately Josiah. Things like cleaning out my refrigerator. Doing laundry. Sitting outside on the steps and watching the girls ride their bikes in the driveway.

I owe that to you little one. I don’t think anything will ever be the same again.