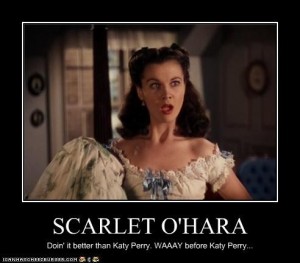 In his book Start: Punch Fear in the Face, Escape Average and Do Work that Matters, Jon Acuff talks a lot about the voices.

You know the voices? The ones that tell you that your thing, whatever that is, is stupid. Or ghetto. Or embarrassing. (Or whatever adjectives your voices prefer, I dunno. I just know mine.)

When you sit down to write a blog post or an ebook or start a business or launch a product and you have an imaginary ex-wife sitting on your shoulder shouting at you about how you’ll never amount to anything.

Last night my family watched the movie 42, about the life of Jackie Robinson.

And I thought, here’s a guy who had voices.

Only they were real.

The voices were of hundreds (thousands) of people shouting racial slurs and booing him. Imagine that.

And at one point he was ready to quit and everybody was like, no Jack you can’t quit because there are little white boys in the suburbs who want to be you when they grow up… you, a black man.

And so he kept going.

And eventually people shut up.

And now once a year everybody who plays baseball wears a uniform with 42 on it.

(My baseball fanatic husband told me that. I didn’t know it was a thing.)

What if Jack had listened to the voices?

Here’s the thing about the voices.

Nowadays they come from inside you.

Listening to the voices is part of The Resistance that Steven Pressfield talks about in his excellent book The War of Art: Break Through the Blocks and Win Your Inner Creative Battles.

The voices are “the naysayer within”, as he puts it. Within indeed – the voices come from inside, not from the outside.

Nobody is shouting at you, you’re hearing the voices inside you say how ghetto or ratchet or white trash or hick or stupid your idea is.

In August I wrote an ebook. Because Crystal Paine. Yeah, that Crystal Paine, suggested I was an expert on the topic.

But I almost didn’t, because of the voices.

Thankfully, at the time I was reading Start. Acuff, being male, uses very mancentric language and encourages “punching fear in the face” and that sort of thing.

As for me, I decided to take a more ladylike approach.

I channel Scarlett O’Hara and give my voices the silent treatment.

When they came up, I didn’t try to fight them.

I just thought, “I’ll think about that tomorrow“, and I kept working.

The interesting part about this was, as the days passed my subconscious began working on these thoughts, and an answer/objection would float to my conscious mind. That was pretty cool.

That first ebook has done extremely well. Over 5,000 downloaded a copy in its first month, and it has a rating of 4+ average stars and dozens of positive reviews on Amazon, so obviously people see value in it.

You know what’s so funny? A fellow blogger named Jendi reviewed my ebook here. I had to giggle because one of my voices said “People are going to think you feed your family crap if you write an ebook about ALDI.”

Turns out others have experienced ALDI shame. Jendi said:

“When my husband told someone that I shop at Aldi and they kind of wrinkled their nose and was like eww. After that, I thought maybe I shouldn’t tell anyone that I shop there, but I continued to do so because it really stretches my grocery budget.  Now Carrie published Slash Your Grocery Budget and Eat a Whole Foods Diet with ALDI

and I’m telling the world that I shop there. “

What kinds of changes in the world are you supposed to be making? What if you listen to the voices and never do anything?

What do your voices say? How do you ignore them?