Update 2016: The kids mentioned here are several years older and use a different curriculum now, but I plan on using Five in a Row with my younger children. This is a review of Five in a Row for the unfamiliar.

This week I started using a new curriculum with my 8-year-old daughter. Five In a Row

has always appealed to me, but I didn’t feel very motivated to change what I was doing, curriculum wise, until recently.

One of the many wonderful things about homeschooling is that nothing is ever set in stone. You can change things on a dime if they’re not working for your family, for you or for your child.

Ilana has been unhappy for a few months now. I thought it would pass, but it became a daily struggle to get her to do her schoolwork. I don’t run a strict homeschool, so I felt that she was going through a bit of a lazy phase, and tried to ride it out.

She spent some time in public school, and enjoyed the experience at first, but then began begging for me to take her out and homeschool again. Since the public school experience was only ever meant to be temporary, it didn’t take much for me to do just that. Things were fine for about a year. 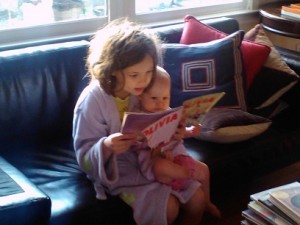 For several weeks recently, she has been asking me to put her back into school, something I really don’t want to do! She kept complaining that 2nd grade math was “too easy”, but 3rd grade was “too hard”. She “didn’t like science”. She does well in history, perhaps because we use Story of the World and have a storytelling kind of approach. I searched around for a curriculum that would excite her a little more and be more her style.

Ilana is a huge bookworm.

She easily consumes a chapter book every day, often more. She’s read classics like A Little Princess and the Anne of Green Gables books several times.. She devours stacks of picture books. She reads in her bed for at least 30 minutes every night until we flip off her light switch (to many protests!).

Five in a Row Review

I thought a literature based curriculum would be just the ticket, and I remembered Five In a Row.

What is Five in a Row?

Five In a Row is a literature-based unit study curriculum. It consists of a Five in a Row volume

(the lesson plan/teacher guide) and a list of books, all of them among the best of the best of children’s literature.

One book is read to the child aloud each day for 5 days (your school week). And then the book is used as a springboard for discussion and work in other subjects that spring from the content of the book. You can use one day each week to “do” Social Studies/Geography, Language, Art, Applied Math, and Science.

As an example, our first week we are reading Three Names by Patricia MacLachlan (she also wrote the Sarah, Plain and Tall

books which later became movies. These are favorites in our home).

Three Names is about a young boy who lived on the prairie 150 years ago. He has a canine best friend who accompanies him to school every day, an experience they both love. The book chronicles a school year and ends with graduation and summer. There are a host of topics that could be considered for further study: Pioneer life (outhouses and one room schoolhouses), the Prairie, animals such as Prairie Dogs and horses, weather phenomenon such as tornadoes, the relationship between people and their pets, and more.

Using Five in a Row

After reading the book aloud, the first day I had Ilana write down vocabulary words from the book (aggie, tethered, graduation, etc) and their definitions (covering language arts).

We discussed the meanings of hyperbole and simile, and she wrote examples of each in a notebook.

The second day she looked up information on the prairie online and also read a brief bio of Patricia MacLachlan (social studies). She wrote a descriptive paragraph (how it felt, smelled, etc) about a familiar place (language arts). She found the prairie states on a map (geography).

The third day she read about prairie dogs in an animal encyclopedia (science). She colored pages about the prairie, and cut and pasted them into a notebook (art). She wrote a book report (her idea) (language arts). She made a chart with “past” things (schoolhouses, outhouses, horse and buggy, etc) and their modern counterparts (large schools, indoor plumbing, cars and buses).

Tomorrow and Friday we will discuss the artwork in the book (for duh, art) and delve into learning about tornadoes (science).

The Five in a Row volumes

have all of the lesson plans for the parent. Contrary to what some of the websites suggest, however, I found that it takes me much longer than “5 minutes” to gather the materials I need each day. Since this is my first week, I don’t have a system yet for gathering the materials I need.  Once I do, I’ll do it only once a week.

I also have Ilana doing a little math each day, separate from the Five in a Row book. Although a younger child could probably learn math by doing various book centered activities, those seem a little simplistic for her. There is a “Beyond Five in a Row

” volume for the 8-12 year old set, but I felt that would be a little too advanced for her. She just turned 8 and is finishing up the 2nd grade.

The only downside I see so far is that (and perhaps this is because she’s older, FIAR is recommended for ages 4-8 so she’s at the upper range of that), she has asked me a few times “Why we’re reading the same book over and over“. I found this surprising, since most kids love hearing the same book repeatedly. Maybe this is because she’s such an avid reader. Her attention span requires fresh material. Anyway, I assure her that she can read whatever she wants after we’re done, and that we can learn something new from each reading. I also make sure I read other books aloud to her.

Also, sometimes at the end of the day I worry that Ilana didn’t do “enough” schoolwork. It makes me a little nervous, but I’m sure that feeling will pass as we get more into the groove of it, and I get more organized with gathering supplemental material. (Because, um, how many 2nd graders could tell you what simile and hyperbole are?!)

Homeschooling multiple children means that I can’t spent a lot of time focusing on one child, and a curriculum like FIAR could take up a lot of time if you let it. However, this curriculum would be wonderful to use with multiple ages!

Other than that one complaint, Ilana seems to be really enjoying FIAR so far. Another thing she really enjoys is art. I think unit study/lapbooking is a good fit for her, because she loves drawing, coloring, cutting, pasting and making little books.

I bought the second Five in a Row volume and most of the books on the book list as a lot from one eBay seller, so this curriculum ended up being very inexpensive. I don’t think I’ve ever purchased an item from eBay in which the seller took time to rave about the product *after* I had made Paypal payment! That told me something about Five in a Row.

From what I’ve read online, it seems parents who use it really come to love it. You can get the FIAR volumes on Amazon. I have most of the books already that make up the book list, and the few I don’t own I was able to obtain through inter-library loan at my library.

There are few things I enjoy better than cuddling up on the couch with a kid and a great book, so this has been fun for me so far too. Since the curriculum is so flexible, it really suits my homeschooling style. I can see it being a great thing for Sadie (5) once I start doing more formal schooling with her. (There is a “Before Five In a Row

” for the pre-K set, I’m still looking into that, but I don’t usually do much formal stuff until my kids are around 7.)

Five in A Row has lots of great resources online, both from the publishers and homeschooling parents who love it. A Google search turned up plenty of links to printables, more recommended reading, topics for discussion, and a lot more.