Here’s a great question a reader sent in: What suggestions do you have for colic in the breastfed baby? 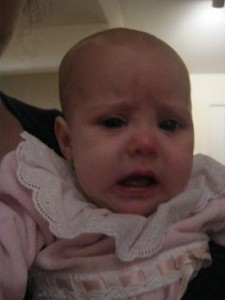 Colic usually refers to babies who cry for long periods of time, especially in the evenings, typically starting a few weeks after birth. Some experts say that colic doesn’t exist, and there is a legitimate reason for the crying that will resolve when the issue is addressed. Others insist on using colic as a catch-all diagnosis. Either way, a mom would be highly motivated to try to help her baby.

Babies with colic are nearly inconsolable during their crying spells. Although breastfed babies tend to experience colic less than their formula-fed counterparts, it is still very much possible for a breastfed baby to have colic. Even though opinions differ as to what causes colic, there are some things that may be contributing to a breastfed baby’s crying and pain that parents may want to know of.

One reason for a breastfed baby’s crying may be that they are not getting the adequate amount of fat during a feeding. Breastfeeding mothers are often taught to breastfeed on each breast during each feeding session. This is done to relieve engorgement of the breasts and stimulate mom’s milk supply. Sometimes, this can prevent the baby from receiving enough of the healthy fats in the breast milk.

During letdown in the beginning of a feeding, the baby receives foremilk, which is a lower-fat consistency of milk (kind of like skim milk). The foremilk quenches the baby’s thirst and immediate hunger.

For a newborn or young baby, switching breasts during feedings can be especially problematic because their appetite is smaller. The hind milk tends to come after mom’s milk has letdown more than once. If your milk supply is abundant, watch for this issue.

How can you tell if this might be a problem? Baby has green poops. Green poops can indicate that baby is getting too much foremilk and not enough hind milk.

This was an issue with my oldest child. Since I had never nursed a baby before and was insecure about him getting enough, I switched sides too often. This led to him becoming fussy and having green poops. When I learned to keep him on one breast for an entire feeding, sometimes even two feedings, the problem went away.

If this is uncomfortable for mom since the other breast remains full, the mother can pump the other side or hand express a small amount to relieve engorgement before the next feeding.

Some mothers may also have a rapid letdown, which can release a lot of milk into the baby’s mouth at once, causing them to cough and spit, struggling to keep up and swallowing a lot of air in the process. Mothers with an overactive letdown can pump out a small amount of milk before putting their baby on the breast, to reduce the rapid amount of milk going into the mouth when the baby first latches on. Nursing while lying down can help, as can sitting baby up (as in a football hold) for feeds. Burping can also help some babies.

Food allergies can cause colic in the breastfed baby.

Don’t rush to alter your diet needleslly. Most moms can eat whatever they want when they nurse.

However, if there is a family history of food allergy a mom could try cutting out the offending food to see if baby feels better. The biggest culprits are usually dairy, wheat, corn and eggs.

Eating fiber and vegetables like beans, onions or spices do not cause colic in the breastfed baby.

This is technically impossible, since it’s undigested carbohydrates that causes gas pain in the Mom, and these cannot pass into breastmilk.

Wearing a baby sling can help comfort a baby with colic.

Babies who are “worn” cry less, according to research. My favorite baby slings were the Maya Wrap

and the Sleepy Wrap

It’s important to remember that unlike formula-fed babies who are often fed on a schedule, breastfed babies often have their own schedule. Nursing on demand can help reduce colic, because they will be fed when hungry and not force fed when not hungry. A breastfed baby with colic may also want to nurse more frequently.

Iron supplements (like those in prenatal vitamins) can bother some babies. When my second child, who was very calm by nature, starting crying a lot, I called my Naturopath who advised that I stop taking my prenatal vitamins for this reason. When I did, the crying stopped. 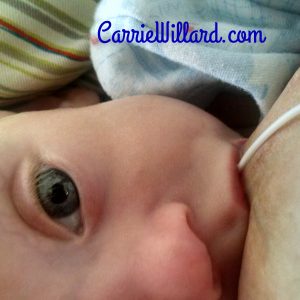 Colic in the breastfed baby: probiotics to the rescue

Infant probiotics can be very helpful in a breastfed baby with colic. These can be purchased inexpensively at health food stores and online

. Probiotics are especially appropriate if you or the baby received antibiotics before or during the birth. Probiotics can also help reflux, which can cause colic symptoms.

When my preemie came home from NICU, I put these probiotic drops

in his supplemental formula (we used a Lact-Aid supplementer). He was diagnosed with reflux in the hospital, but he had no trouble with it after a few weeks on the probiotics.

Do you have any experience or advice for eating colic in the breastfed baby?