This post is my Bringing Up Bebe review. The book, Bringing Up Bebe: One American Mother Discovers the Wisdom of French Parenting, made quite a stir when it was published! 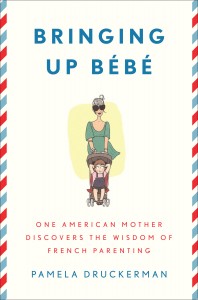 When I first heard about the book, I was immediately intrigued. How parenting habits and customs differ across cultures is a topic that is fascinating to me, and I love to read about French women.

Also, I had read several negative things about the book, especially from natural/attachment parenting types, and yet others were singing the book’s praises. The controversy grabbed my curiosity. I ordered a copy and the day it arrived, I had finished it by late afternoon. I simply couldn’t put it down.

Firstly, I was struck with how much of the book’s content I wholeheartedly agreed with. As I mentioned, some bloggers had mentioned the book in negative terms. But now I wonder whether they had actually taken the time to read it.

To be fair, according to the author Pamela Druckerman, practices such as natural childbirth, cosleeping and long term breastfeeding are generally not practiced in France. I think that’s why many attachment parenting proponents would be turned off, tout de suite, and not give the rest of the book open-minded consideration.

It may sound offensive to some, but one of the guiding principles in my own parenting is my desire not to raise a “typical American child”. In my mind that meant a spoiled, narrow minded, disrespectful, media-addicted child with a very small worldview. This is precisely the kind of child that French parents probably wouldn’t tolerate either. I also firmly believe children should be charming.

Some of my favorite parts of Bringing Up Bebe:

To be specific, French children are taught to always speak to adults. A child who doesn’t greet an adult in their presence is said to have “no upbringing”, and may be considered a bad influence. This training is something that seems sadly lacking in a lot of families.

As an example, the other day an older gentleman came to my home to pick up 3 children that were staying with us (while their caretaker was in hospital). When he walked in the door, my oldest warmly and enthusiastically bade him Good Morning, and my next oldest offered him coffee. (The other children were not up yet.)

Two of the visiting kids never bothered to speak to him or really acknowledge his presence until they needed his help with something. That was appalling and completely unacceptable to me.

I was a very shy child, and it was almost painful for me to speak to people I didn’t know well, especially adults. But I was expected to do so, and I did it. As a result, my friend’s parents didn’t think I was a snob or rude. When children come to my home and speak to me and acknowledge my presence, they are welcome to come back, even if their behavior is imperfect.

French children are taught to wait patiently for things, and not to interrupt others. Why isn’t this something all parents value? I do not allow my children (past the toddler years) to interrupt me when I’m talking to my husband.

French parents teach their children proper behavior at the table.

(The book’s title in England is French Children Don’t Throw Food.) With 7 kids eating and conversing at the table in my home, it’s easy for things to get a little too boisterous. But I do not allow playing with food, saying rudely negative things about food (they may tell me they don’t prefer that food, but only after saying something positive), making faces, playing/reading while eating, or other behaviors I deem inappropriate at the table.

And although I have one picky child, she is expected to eat one bite of foods she doesn’t prefer. There are no children that eat only chicken nuggets and fries in my house! Tonight, we had scallops in a lemon butter sauce, cauliflower with tomatoes and feta cheese, and a 3 bean salad with greens. And everyone ate heartily.

French toddlers and young children are expected to eat a wide variety of foods (not a monotonous “white diet”) and to behave themselves appropriately at table, and so they do!

Another thing about food: French children eat 3 meals a day, and one snack at around 4:30. Because they come to the table hungry, they’re less likely to play with or turn up their nose at food.

Since becoming a mom, I’ve always thought it was odd the way the mothers around me carried snacks in their purses and diaper bags for their children to nosh on constantly. When I leave the house, I don’t carry anything except perhaps water in summertime. If the kids get hungry, they can wait until we get home.

I do wish my children didn’t snack when they were at home (even though they’re eating fruit, cheese, nuts, and healthy things) because I have read so much about snacking causing tooth decay. But I personally cannot go without food for more than 3 hours, so I feel hypocritical asking them to. Any thoughts on this? (Do French people not experience low blood sugar?)

This is something that has evolved in my own mothering journey over time. It’s very easy to lose yourself in mothering, especially with your first child. But at this stage in my life, I’m keenly aware that motherhood is a temp gig. It won’t last forever, and if children are the only thing you live for, what will you do when they leave your home to pursue their own lives? The entire point of parenthood is to prepare children for this eventuality: that they will become adults with separate lives.

For French women, this balance means several things. It means not using pregnancy as an excuse to gain tons of weight (and keep it), giving up one’s interests and passions, or neglecting adult time.

French women also don’t make the feminine mistake of giving up their incomes to raise their kids.

I have often noted that it’s a shame the way so many moms let themselves go after having a child. They use the baby as an excuse to leave the house with dirty hair, sweatpants, and jogging shoes. I’ve never owned a pair of sweatpants or yoga pants, and if I did I certainly wouldn’t wear them to the grocery store. The ponytail/yoga pants/athletic shoe seems to be the standard mom uniform around here, and it’s a shame. 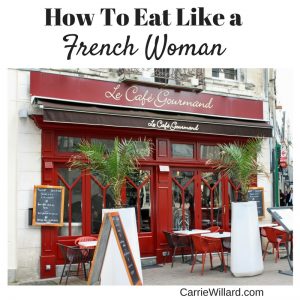 French women will show up at the playground with skinny jeans and pumps, and I say more power to them!

When it comes to combining a career and motherhood, there are many social services in France that are unavailable here in the US that make it FAR easier for a woman to pursue paid work if she wishes to. (For instance, extremely high quality, government subsidized child care.) I have written in the past about the dangers of economic dependence for women. Even though I have chosen to be a stay at home mom since my first child was born, I do not believe that it is wise for a woman to depend entirely on a man for financial support. 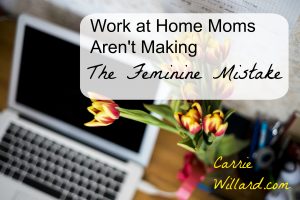 This was one of my favorite themes in the book. The smother mother/helicopter parenting trend is so annoying to me. Hubby and I always share a private giggle when we go to the playground and observe the parents who cannot let their children play because they are so busy providing a running commentary of Johnny’s every.single.move. I call them “the self esteem police” because it’s as if the parent thinks that by praising their child every moment for the most ordinary of activities (like playing!?) they will “build” their self image. That’s patently false, for one. It simply doesn’t work. It’s something some American parents do because they heard somewhere that praise was good. (So constant, ridiculous praise must be really good!) Secondly, it sounds pathetic and obnoxious.

“If they’re not bleeding, don’t get up…”

French parents don’t engage in this type of parenting. They allow their children to have their own inner world without constantly interfering. I call this Benign Neglect. And it keeps you from hating parenting. Which is something many parents do, if they’re honest. And in fact in many studies, parents are less happy than childless people. The stats are reversed in France – big surprise! And stay at home moms are more depressed than their working peers.

* French parents are comfortable with their authority

I’ve noticed that many parents are uncomfortable with being in authority. They are almost apologetic about it. In my observation, this is especially a problem among attachment parenting proponents. They have a hard time practicing gentle discipline without abdicating their authority.

French parents refer to something called the “cadre”, or framework. In a nutshell it refers to proper boundaries.  The cadre is firm and non-negotiable, but inside the frame the child has lots of freedom.

This sounds like a perfect balance to me. “Non” means no, which means a child doesn’t have to constantly test and push the boundary, saving both the parent and child emotional wear and tear. Children who know this have more time and energy to devote to the important business of childhood. They’re less stressed, and happier.

The only problem with this book? Like every other book about France I’ve read, it made me want to move there. Of course, with my homeschooling, homebirthing, long term breastfeeding ways, I would probably be seen as a freak of nature and it would likely be difficult to make friends.

Have you read Bringing Up Bebe? What were your thoughts?